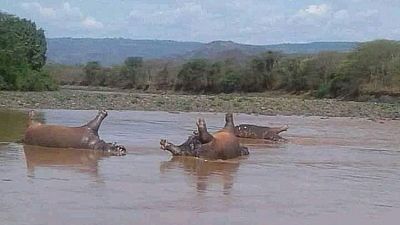 Close to thirty hippopotamuses were killed in a park located in Ethiopia’s southwestern region, the Southern Nations Nationalities and Peoples Region, SNNPR.

Behirwa Mega, head of the Gibe Sheleko National Park told the state-affiliated Fana Broadcasting Corporate that the animals died in a space of one-week – between 14 April and 21 April, 2019.

The cause of the deaths have been aligned to suspected anthrax outbreak or toxic algae, the director of the Ethiopian Wildlife Conservation Authority told the BBC Afaan Oromoo service on Monday.

According to Kumera Wakjira, this was the worst wildlife disaster in Ethiopia. The Gibe Sheleko National Park is one of the conservation area located 178 km.from A.A. & 433 km South west of regional capital, Hawassa.

The SNNPR tourism bureau noted that the area of the park covers: “grasslands with scattered trees, woodland, mountain & riverine forest.The park is also inhabited by an extraordinary composition of fauna. Recent records show that about 16 species of larger mammals inhabit the park .

In February this year, conservationists slammed the Zambian government when it announced the decision to slaughter over 2,000 hippos citing overpopulation. Two years ago, about 100 hippos died following an anthrax outbreak in Namibia’s Bwabwata National Park.

Whiles an anthrax outbreak caused the deaths of a least 10 buffaloes about two weeks ago at Kenya’s Lake Nakuru National Park.

Hippos, which are herbivorous, semi-aquatic mammals, are classified as “vulnerable” in the Red List compiled by the International Union for Conservation of Nature (IUCN). About 130,000 remain in the wild, in central and southern Africa.