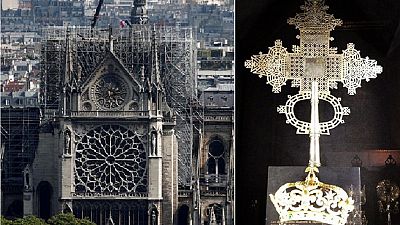 Ethiopia on Thursday confirmed that a cross offered to the Notre-Dame Cathedral in 1954 was among some of the pieces of history that survived a blaze that ravaged the church.

Emmanuel Besnier, Deputy Head of Mission at the Embassy of France in Ethiopia, confirmed on Twitter that the cross offered by His Imperial Highness Haile Selassie had since been moved to the Louvre Museum.

“We can now confirm, with great relief, that the #Ethiopian cross offered to #NotreDame cathedral in 1954 by HIH Haile Selassie has been spared from this week’s fire and is now safe at the Le Louvre museum,” he wrote.

France continues to count the cost of losses after the Tuesday evening blaze. Over a half dozen African leaders sent words of commiseration shortly after the incident.

We can now confirm, with great relief, that the #Ethiopian cross offered to #NotreDame cathedral in 1954 by HIH Haile Selassie has been spared from this week's fire and is now safe at the MuseeLouvre museum. ????AmbEthioFR pic.twitter.com/jlYQCJISi5

Notre-Dame embodies 850 years of history. The cathedral which is also a tourist attraction for the French capital Paris has many symbolisms for more than eight centuries it has been in existence.

Records indicate that 14 million people visit Notre-Dame de Paris every year. The cathedral is one of the most important monuments in the Christian world. Its plan is designed to reflect Paradise.

Its construction began at the beginning of the 12th century and lasted more than a hundred years. The 850th anniversary of Notre-Dame was celebrated in 2013.

Notre-Dame was spared by the two world wars and barely escaped the flames a first time during the Commune: riots when rioters set fire to several benches, but the fire was contained.