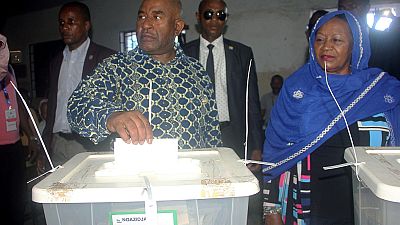 Incumbent president Azali Assoumani of Comoros was on Tuesday declared winner of the presidential election, even as the opposition rejected the electoral outcome as fraudulent.

The electoral body CENI said in a statement Assoumani had won 60.77 percent in Sunday’s vote. The runner up, Ahamada Mahamoudou, one of 12 opposition candidates, received 14.62 percent.

Assoumani’s victory with more than 50 percent of the vote ensured he avoided a second round against a single opponent.

I cannot recognise the results of rigged elections.

The results had initially been scheduled for release on Monday, when police used tear gas to disperse opposition demonstrators protesting against the vote.

Observers from three regional bodies – the African Union, the Common Market of Eastern and Southern Africa, and the African Standby Forces of the East – said on Monday the voting process was full of irregularities that led them to conclude it lacked credibility or transparency.

Opposition candidates said Sunday’s vote was marred by irregularities including barring of independent monitors and marking of ballot papers before voting began – all of which the government denied.

“I cannot recognise the results of rigged elections. From the outset I reject the results that will be proclaimed by the electoral commission, and invite the stakeholders to reorganise … free and transparent elections,” Mahamoudou Ahamada, candidate of the leading opposition Juwa party, said.

The authorities criticised the opposition candidates for stirring unrest.

“This is not the right time for the 12 opposition candidates to push citizens into the streets to provoke trouble and public disorder,” Interior Minister Mohamed Daoudou said on Tuesday.

He said he had ordered the mayor of the capital Moroni to prohibit public gatherings without his permission.

The Comoros presidency is traditionally rotated among leaders from the three main islands of the Indian Ocean archipelago. Assoumani, a former army officer, first came to power in a coup in 1999 and won elections in 2002 and 2016.

Last year he triggered months of protests by extending term limits, allowing him to stand for another consecutive term and angering natives of the island of Anjouan who argue that it is their turn to hold the presidency.