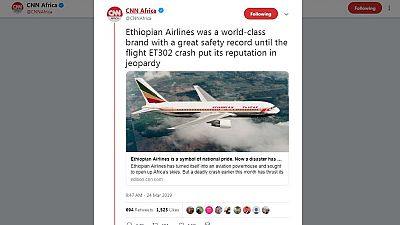 Barely a week after Ethiopian Airlines publicly remonstrated with two U.S. media giants over what it said was misreporting on its operations, another media outfit ruffled Ethiopian’s feathers.

But it was not the airline that responded rather its patrons on social networking platform Twitter who stood in defence of the airline – Africa’s most successful and profitable.

CNN Business published a story titled: “Ethiopian Airlines is a symbol of national pride. Now a disaster has put it under scrutiny,” but the problem was with a heading that CNN Africa used in posting a tweet of the story.

“Ethiopian Airlines was a world-class brand with a great safety record until the flight ET302 crash put its reputation in jeopardy,” the statement said. That was the trigger for many people who slammed the sentence and strongly stood by the side of the airline.

Whiles some vouched for Ethiopian’s safety record and its reputation, others took a swipe at the assertion whiles others went as far as replace Ethiopian with U.S. plane maker Boeing in terms of safety and reputation.

CNN has since added two tweets to the controversial earlier one. The first quoting an analyst on impact of Ethiopian and the other announcing times for one of its programs.

The said tweet has received more comments that retweets and likes. We sample a number of the critical tweets.

.CNNAfrica let us FIX the headline for you. flyethiopian is a world class brand with a great safety record until American BoeingAirplanes almost crash its reputation by selling dangerous airplanes to it's clients across the globe leading to mass killings of innocent travelers.

Boeing was a world -class shoddy corporation shielded by powerful lobbyists in America until the ET302 crash put its reputation in jeopardy; more than 50 countries have since grounded the Boeing 737 8 and 9 Max. CNNAfrica we’re woke. https://t.co/Bsi4Mvop0D

Ethiopian Airlines IS a world-class brand with a safety record so impeccable that rather than the flight ET302 crash putting its reputation in jeopardy, it triggered a worldwide grounding of all Boeing 737Max aircrafts.
That’s the height of trust.

I saw this nonsense headline first in FT. Now CNNAfrica. And of course washingtonpost and nytimes nytimesworld are not too far off. All paid for by Boeing BoeingAirplanes PR money.

The US globalists must accept ONE thing. Their MAX plane is junk. flyethiopian is GREAT.

I’m not even going to read this article. Boeing manufactured and sold plane that clearly has technical problems. Most countries have grounded the 737 Max or banned it from their airspace. CNNAfrica conveniently ignored all that so they can vilify flyethiopian Wow!!

CNN our to tarnish the image of a thriving African airline. The blame should be put squarely on Boeing. CNN is all about safeguarding American jobs. Ethiopian Airlines safety record is great… and it is transforming the skies of Africa!