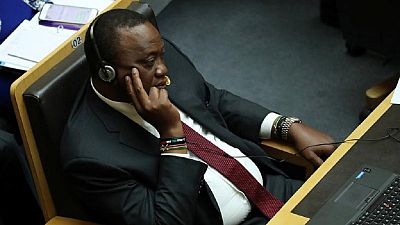 <p>Millions of social media followers of Kenyan president Uhuru Kenyatta are unable to access his official accounts as at Friday morning (March 22).</p> <p>The official reason for the ‘blackout’ on Twitter and Facebook was due to both accounts having been compromised, Kenyatta’s Chief of Staff confirmed.</p> <p>“On account of unauthorized access to the official social media handles of H.E the President of the Republic of Kenya, Uhuru Kenyatta. All official social media handles for the President have been temporarily suspended to allow for the necessary remedial measures to be undertaken,” Nzioka Waita said.</p> <p>He also added that the incident was allied to the president’s anti-corruption fight. “It seems the President’s stand on corruption has generated all manner of reactions,” he added in a second tweet.</p> <a href="https://www.the-star.co.ke/news/2019-03-22-why-we-deactivated-uhurus-twitter-account-state-house-chief-of-staff/" target="_blank"> The Star newspaper, </a> a privately-owned outlet reported however that the deactivation was because of a tweet that was deemed politically sensitive hence the move. <p>The said tweet spoke about the President’s unrelenting resolve to fight corruption irrespective of who was complicit including the term ‘closest political ally.’ </p> <p>The president’s closest political ally is believed to be the Deputy President William Ruto who has serially been accused of corruption. </p> <p>Mr Ruto, who has refuted the allegations, is believed to be eyeing the presidency when Uhuru’s current term ends. He has been Uhuru’s deputy since 2013, the duo won a second term in 2017.</p> <p>It is not the first time such a measure has been undertaken, in July 2018, the Chief of Staff announced official Twitter handles for presidential communication at the time as part of efforts to streamline information flow. Two official handles at the time were subsequently deactivated.</p> <p><img src="https://static.euronews.com/articles/70/70/707079/1024x576_bonus-Tweet.jpg" alt="" /></p>