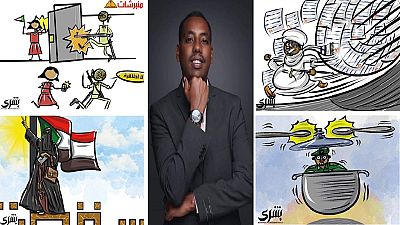 Over in Sudan, there is an uprising that keeps rising, calling for the president in charge for 30-years to quit. It has been pitted as a battle between the ordinary Sudanese and the regime of President Omar Al-Bashir.

At the heart of the protests which started in December 2018 is the Sudanese Professionals Association, SPA, which continues to rally people. It has largely been supported by the population who have even defied a current state of emergency dispensation to keep protesting.

Social media – Facebook, Twitter – have been two major avenues through which the SPA communicates. It has also been a major outlet where people expose the excesses of the state – i.e. the harassment, extrajudicial acts and mistreatment of peaceful protesters.

The subject of this piece, known by his ‘trade name’ Boushra Cartoonist describes himself as an amateur but is proud to contribute to events even though he is not directly involved in turning up for the almost daily protests back home.

Boushra Elmougahid is Sudanese, trained back home in project management at the Sudan University of Science and Technology, SUST.

He currently lives and works in Riyadh, Saudi Arabia but keeps taps on events back home – through the art, his cartoon pieces.

He spoke to Africanews in an interview addressing issues related to his part-time work – the role and impact of social media, the factors that inspire him, his expectations of the current situation etc.

1 – How important is social media to your work?

It’s very important because it represents the alternative media in our current times given that the new generation’s ties with the classic (traditional) media are not the same as previously.

2 – Which social media platforms do you use?

Twitter and Facebook mostly because they are the most famous and the widest spread social media platforms in Sudan.

3 – How did you drift to cartooning as an engineering student?

I think that engineering is a system and a way of thinking that shapes your way of life and makes you see things differently and perspectives.

Besides, my work in project management has offered me a deeper and more insightful vision and helped me express (myself) through caricature drawing.

4 – How do you make time for cartooning and how easy/hard is it blending professional responsibilities with daily activism?

I still see myself an amateur although I used to have it as a job during my university days – it helped me earn some money, now I work as a project manager in engineering mainly and I devote myself to drawing after the work hours to document the Sudanese uprising mainly.

I also actively drwa on the Arab world and regional events generally. I believe that as long as you love and cherish your hobby you will enjoy doing the impossible with it.

5 – Do you encounter opposition (threats) to your work?

Not really, and if there any of the threats I don’t take them seriously, but my family and friends have some fears but I tend to calm them because there’s no any actual evidence for any threats.

6 – Do you have fears of reprisals – say from authorities?

7 – How many pieces do you work on daily – on an average?

It depends on the ongoing events, sometimes they reach five caricatures a day.

8 – Who is your most cartooned character?

I don’t tend to paint specific characters; I concentrate mostly on concepts. (It is) because I believe it’s the thing that our country needs the most. If we had hope, we can reach the positive change we’re looking for.

9 – What in your view will be the ‘perfect end’ to the uprising?

The end is the falling of the current regime and the collapse of the negative and devastating customs and habits in our community and to have a unified vision that we all work hard to achieve.

We have really high hopes that our country which used to be known as “the ill man of Africa” heals from its sickness and stands on his feet again and becomes a light of hope for the whole world as it was before.