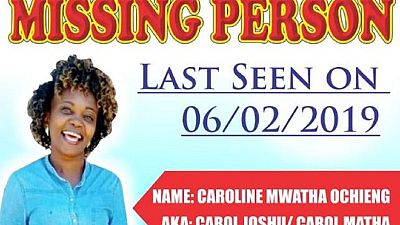 Kenyan police have issued a statement indicating that a prominent Kenyan human rights activist who championed the fight against police brutality and extrajudicial killings in her country, died from a botched abortion.

Caroline Mwatha disappeared in Dandora, a poor neighbourhood in the capital Nairobi where she lived and campaigned against abusive treatment of people in police custody in the East African country.

Kenya’s Directorate of Criminal Investigations (CID) said in a statement that Mwatha died during an attempted termination of her five-month-old pregnancy, and six people were under arrest.

Investigators believe that Caroline died in the clinic and the body was transferred to the Nairobi city mortuary.

Local media said she went missing on Feb. 6, and the CID said it began an inquiry two days later, finding that Mwatha had been engaged in communications “relating to an intended abortion of a five-month-old pregnancy.”

“Investigators believe that Caroline died in the clinic and the body was transferred to the Nairobi city mortuary,” the statement said, adding that those who took the body to the morgue gave a false name for the deceased.

PRESS RELEASE ON THE DEATH OF CAROLINE MWATHA OCHIENG pic.twitter.com/MMOn1uPve4

The CID statement did not elaborate on why the six were arrested, but said the group included the owner of the clinic where the abortion was carried out, her son, a doctor involved in the procedure, and a taxi driver.

Investigations were continuing, the CID said.

Mwatha’s family have since questioned the police report and demanded an independent post-mortem.

“We have never seen Caro with a pregnancy, she was not pregnant, how can she have been aborting?” her father Stanslus Mbai told journalists at the mortuary.

“It is puzzle to us. Very strange because I have looked at the body. She has a deep cut on the thigh and stomach, is that abortion?”

“We want the truth and nothing but the truth in this. We must have an independent post-mortem to know the truth.”

Mwatha worked for the Dandora Community Justice Centre, which has documented cases of extrajudicial killings by security personnel in the area and campaigned for accountability and justice for the victims.

London-based global rights group Amnesty International described Mwatha as a “a mum not just to her children but also to the whole community, loving and caring; a cheerful personality, a leader who always led by example.”

The government established the Independent Policing Oversight Authority in 2011 after police were blamed for the deaths of dozens of protesters in violent clashes following a disputed presidential election in 2007.

But the authority has only managed to secure a handful of convictions against accused policemen despite numerous complaints from the public.

So DCI_Kenya waited until the body was found at city mortuary to suggest the botched abortion narrative? At what point did they have this information? Things are not adding up on Caroline mwatha. #JusticeForCaroline

The death & circumstances surrounding Carol Mwatha’s death arouse both fear and anger. You stand & fight for what is right & not only do you lose your life but you’re dragged through the mud just to cover up the whole thing?
Today we mourn Carol; tomorrow it could be 1 of us.

Say her name. Say it with tears in your heart.

Say it because she is dead.

Say it because she is no more.

Say it because she spoke for those whose voices had been cut off.

Say it because you live in a country that can do this to you.

So sad. May comrade Caroline Mwatha Rest in Power. https://t.co/ZB1h54ygmm

Caroline Mwatha, mother of 2, human rights defender, resident of Dandora, documentor of extra-judicial killings, disappeared last week, is found dead in a mortuary. Who killed Caroline? Why? The truth must be known& struggles 4 human rights must continue. Rest in power Caroline https://t.co/f1cZxKbCPU