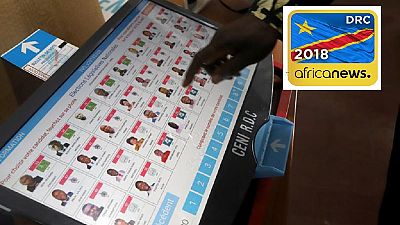 Despite the rather chaotic and tensed campaigning period and events thereof, the day of voting – December 30, 2018; passed with very minimal skirmishes reported.

A United Nations report cited by Reuters however noted that despite the relative quiet, there were instances where rebel elements forced people to cast ballots for particular candidates.

People also sparsely reported about delays and breakdown of machines in some places, voters turned out in their numbers braving the rains to cast their ballots. Areas banned also held mock votes and promised to send results to CENI.

With voting over, the next step was the wait for preliminary results from CENI. But to avoid the spread of fake results, the government cut off internet and the signal of French broadcaster RFI – which is widely listened to across Congo.

The results wait passed a week mark with pressure mounting in CENI to release results. The Catholic Church will however take the lead with a crucial declaration – that one clear winner had emerged in the presidential race.

Despite not naming a particular candidate, international news agencies reported that documents they had been privy to showed that the Church’s winner was Martin Faylu. The Church had deployed some 40,000 observers for the vote.

Government, the ruling coalition and CENI went after the Church’s declaration describing it in part as reckless at a time of political tension. International voices added pressure for release of results.

Then CENI called a press conference on January 10 amid high security it announced a Felix Tshisekedi victory much to the joy of members of his Cap for Change, CACH coalition.

Whiles one part of the opposition hailed the new dawn that was upon the Congo, Fayulu supporters staged protests over the CENI preliminary result claiming the results had been doctored.

Tshisekedi won the vote, followed by Fayulu whiles the FCC candidate Shadary was third according to CENI.

The diplomatic community weighed in on the result expressing doubt in part – especially France and Belgium, whiles the United States and United Kingdom called for detailed publication of results.

For their part, the European Union, EU, whose envoy was ejected from Congo with hours to the vote, simply said it had taken note of the results and urged people to continue being peaceful despite reservations.