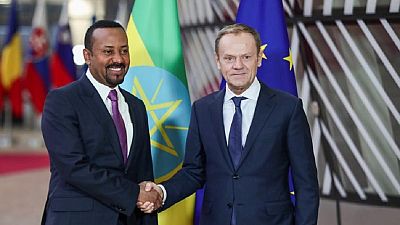 Ethiopia Prime Minsiter Abiy Ahmed arrived in Brussels, the seat of the European Union, where he is scheduled to hold meetings with top officials of the continental bloc.

Abiy has met with the European Council President Donald Tusk for a meeting. His office said the discussions focused on issues of mutual cooperation interests to both parties.

Belgium is the third stop of an official tour that started on Monday in Rome where Abiy met with his Italian counterpart and the president. He also met the Pope and heads of other international agencies.

From Rome, he traveled to Davos, Switzerland, where he participated in the World Economic Forum, WEF. In his address, Abiy stressed the resolve of his administration to see through and consolidate wide-ranging reforms started since April 2018.

Abiy held several high-profile meetings on the sidelines of his participation at the WEF as he continually wooed investors to Africa’s second most populous nation.

The #EU and #Ethiopia sign 3 agreements worth €130M to support #Ethiopia’s plans for economic development and job creation. pic.twitter.com/67l4neXpjC

PM Abiy Ahmed met with Bill Gates, co-Chairman of Bill & Melinda Gates Foundation. He thanked Mr Gates for the work of the Foundation in health, agriculture and state capacity building. They further agreed to enhance cooperation in Ag. irrigation and technology sector.

He met with Jack Ma, Chair of the Alibaba Group. They discussed the future of disruptive technologies on mkts & society. Jack Ma agreed to consider potential investment in a tech city in Ethiopia that will impact daily lives of the people in the region.

On the sidelines of World Economic Forum in Davos, PM Abiy Ahmed met and held discussion with Mr Mohammed Al Shaibani, CEO of Investment Corporation of Dubai — a 200 Billion Sovereign Fund. ICD is keen to invest in hospitality and agro-business industry in Ethiopia.