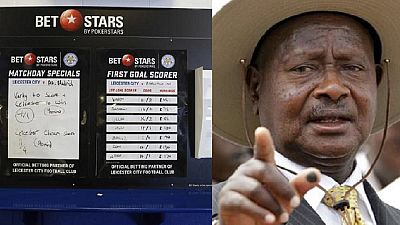 President of Uganda, Yoweri Kaguta Museveni, has ordered a ban on sports betting in the East African country, a minister has disclosed over the weekend.

“We have received a directive from President [Yoweri] Museveni to stop licensing sports betting, gaming and gambling companies. The president has now directed the board which has been regulating them,” Mr Bahati is quoted to have said.

From now onwards, no new companies are going to be licensed. Those which are already registered, no renewal of licences when they expire.

He cited the negative impact of betting on the youth as the main motive behind the presidential directive. “From now onwards, no new companies are going to be licensed. Those which are already registered, no renewal of licences when they expire,” he added.

The Minister was speaking to a church congregation in the western town of Kabale. He insinuated that the prayers of church leaders who oppose betting had been anwsered and they now had cause to celebrate.

Sports betting continues to gain a stranglehold across most parts of Africa. Young people are usually seen camped at centers especially placing bets on football games in the English Premier League and other top football leagues.

Betting bodies are usually regulated by law and operate under national gaming bodies that license them. The specific case of football betting continues to raise concerns because its main patrons are young people.