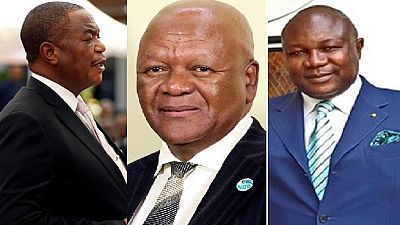 Three African nations were being governed by Acting presidents on Monday, including South Africa, Zimbabwe and Gabon.

While Gabon has had an acting president for over a month, after president Omar Ali Bongo suffered a stroke in November, in Zimbabwe and South Africa, the heads of state nominated officials to take charge of the country while they travel abroad on official duties.

By definition, an acting president ‘temporarily fills the role of a country’s president when the incumbent president is unavailable (such as by illness or a vacation) or when the post is vacant (such as for death, injury, resignation, dismissal).

Different countries are however guided by their constitutions in deploying the office of acting president.

In many cases, the acting president does not exercise the full powers of the presidency, usually requiring cabinet or parliamentary approval to make decisions like deployment of the military, hiring and sacking of government officials and entering into any international agreements.

Cyril Ramaphosa on Monday appointed the energy minister, Jeff Radebe as the Acting President of the Republic of South Africa.

A statement from the presidency said Radebe takes charge of government affairs until Ramaphosa returns from his working visit to the Republic of Mozambique.

The deputy president, David Mabuza, who would ordinarily have taken charge of the country in Ramaphosa’s absence, has travelled to Ethiopia, in his capacity as Special Envoy to South Sudan, to strengthen the ongoing political efforts towards finding lasting peace and development for the world’s youngest nation.

Radebe’s stint as acting president lasted one day, as Ramaphosa was expected back in the country on the same day.

Zimbabwe’s information ministry on Sunday confirmed that the country’s vice president Constantino Chiwenga, would take charge as ‘acting president’, as Mnangagwa, left for a trip to Russia.

Chiwenga, who always take charge of the country’s affairs during Mnangagwa’s frequent visits out of the country, is under pressure to contain nationwide protests that have left at least 5 people dead.

Gabon’s president Ali Bongo returned to the country this week to inaugurate a new government, following a three months medical leave, that necessitated a constitutional amendment to provide for an acting president.

The Constitutional Court ruled in November that Bongo’s vice president is eligible to lead the cabinet meeting which had been put off since Bongo was admitted in a Riyadh hospital in October. Before that, only the president could authorise his deputy to chair a cabinet meeting.

While it was originally provided for the senate president to be named as interim president, in the event that the sitting president is incapacitated, the court modified the constitution to address the scenario of ‘temporary incapacity’ of the head of state.

‘‘In the event of the temporary unavailability of the president… certain functions… may be carried out either by the vice president or the prime minister accordingly, on special authorisation of the Constitutional Court,’‘ read the modified text.

There are other African countries that have been governed by acting presidents including Nigeria, Kenya and Zambia.

Kenya’s president, Uhuru Kenyatta in 2014 briefly transfered power to his deputy, in order to attend a court session at the International Criminal Court, where he had been charged in his individual capacity.

“To protect the sovereignty of the Republic of Kenya, I will shortly sign a legal notice appointing Hon William Ruto as acting President while I attend the status conference,” Kenyatta said at the time.

Last year, Zambia’s finance minister, Margaret Mwanakatwe served as acting president, when both president Edgar Lungu and vice-president Inonge Wina, were out of the country on official duty.