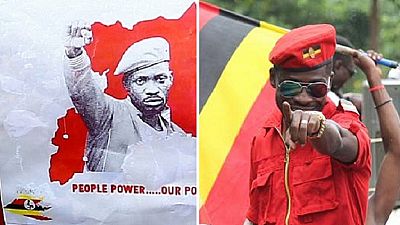 Uganda’s famed pop star and lawmaker, Robert Kyagulanyi, popularly referred to by his stage name Bobi Wine, has been named a 2019 Global Thinker by the Foreign Policy magazine.

The magazine named him under the 10 thinkers in its Activism And The Arts section of its annual list. It described him as a rallying point for the youth and fight for dignity of the poor.

It chronicled Bobi Wine’s headaches over 2018 as he led protests against a social media tax. He got arrested, claims torture in detention before he struggled to be allowed to seek medical attention in the United States. He is currently facing charges before a magistrate court.

What FM wrote about the ‘People Power’ leader

Uganda’s firebrand singer-turned-politician grew up poor in Kampala. Today, he represents a section of the city as a member of parliament.

Bobi Wine, born Robert Kyagulanyi, has rallied Uganda’s youth by arguing against a proposed social media tax and fighting for the dignity of the poor.

Ugandan soldiers attempted to silence Wine in August 2018, first beating him brutally and then bringing him to trial for treason in a military court, although he is a civilian.

Wine recovered, picked up attention in the international media, and his “people power” campaign continues, undeterred.

Extremely honored to be named amongst the ForeignPolicy Global Thinkers, 2019.
Humbled that the small things we do for our country & our people are appreciated by the world. Such recognition by the world only reaffirms to us that ours is not a wrong cause. Encouraged to carry on https://t.co/qcVBtIQ8aD

Other persons listed under the same bracket as Bobi Wine were Wa Lone and Kyaw Soe Oo – Reuters journalists facing trial in Myanmar.

2019 marks the 10th anniversary of the special edition, FP thus split the list into 10 categories of 10. “We reserved 10 spots to be picked by our readers. And, finally, we have a group of 10 great minds who died in 2018,” the magazine confirmed.

The magazine will be progressively releasing names of different categories such as thinkers and doers, 40 and under, as well as those in defense and security, energy and climate, technology, economics and business, and science and health.

Christine Lagarde, head of the International Monetary Fund and CNN’s Fareed Zakaria are listed in the Top 10 of the last 10 Years category.

The 40 and Under Category also listed Jacinda Ardern, Prime Minister of New Zealand and Alexandria Ocasio-Cortez, a U.S. representative from New York.