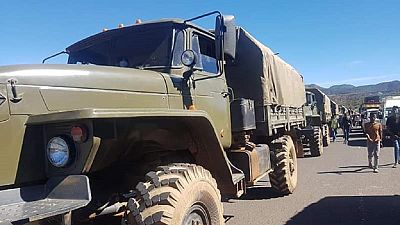 The trucks are part of army withdrawals from the Eritrean border where they had been stationed over the past two decades during a border standoff. The incident which took place in the towns of Shire and Zalambessa.

Debretsion asked the youth to avoid blocking the trucks because it could lead to conflict. He was speaking in the state capital, Mekelle, the BBC reported.

Angry youth explained that they needed clarity over regional security with the withdrawal of federal forces.

Since the deal signed in Asmara, the two countries have restored all friendly relations and border crossings between them have been reopened, first in September 2018 and recently at the Humera – Omhager crossing points.