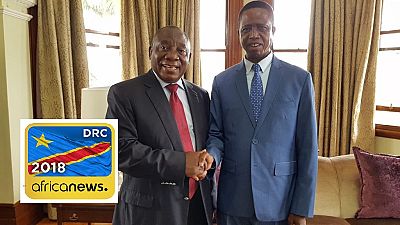 Presidents of South Africa and Zambia have commented on the electoral situation in the Democratic Republic of Congo, DRC, calling on the elections body, CENI, to speedily work to release results.

South Africa’s Cyril Ramaphosa met with his Zambian counterpart, Edgar Lungu in Durban on Wednesday for discussions around the regional bloc, SADC, mission to observe the polls.

A statement issued at the end of the meeting read: “Presidents Ramaphosa and Lungu have called on CENI to speedily finalize the vote tabulation and release election results in order to maintain the credibility of the elections.

“The two Presidents underscored that the delay in releasing the results of the elections can lead to suspicions and compromise the peace and stability of the country.

“… (they) also called on all political parties and the generality of Congolese to remain calm and exercise total restraint while waiting for CENI … to release the final results,” the statement added.

They reserved praise for the United Nations mission in the country, MONUSCO, and state security for overseeing a peaceful voting process during the December 30 general elections.

“The two Presidents agreed to monitor the situation in DRC and committed SADC’s support and solidarity,” the statement concluded.