Burundi to oppose AU's request for withdrawal of troops from Somalia 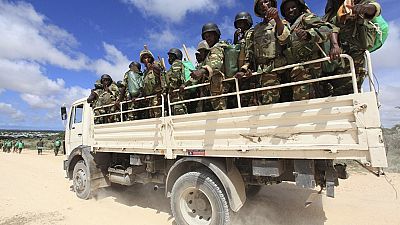 <p><strong>Burundi looks set for yet another clash with the African Union, after its army said it opposed a request to withdraw 1,000 soldiers serving in an African peacekeeping force in Somalia by February 28.</strong></p> <p>Burundi army spokesman Colonel Floribert Biyereke said in a statement issued on Sunday, that the military would ask the government to argue for a proportionate number of troops be withdrawn from each AU member country, rather than solely Burundian soldiers.</p> <p>Burundi is the second biggest contributor to the 21,500-strong peacekeeping force with 5,400 soldiers, behind Uganda with 6,200 but ahead of Djibouti, Kenya and Ethiopia.</p> <p>The African Union is gradually scaling back its Amisom force as Somalia’s nascent armed forces are trained and deployed to replace them.</p> <a style="font-size:16px; font-color:yellow;" href="http://www.africanews.com/2018/05/15/amisom-leaders-endorse-somalia-s-readiness-to-take-over-security/"target="_blank"><span class="caps">READ</span> <span class="caps">MORE</span>: <span class="caps">AMISOM</span> leaders endorse Somalia’s readiness to take over security responsibilities</a> <p>Amisom was first deployed in 2007 to support Somalia’s fragile internationally-backed government and fight Al-Shabaab jihadists blamed for scores of bloody attacks.</p> <p>The <a href="http://www.africanews.com/2018/12/21/burundi-to-withdraw-1000-troops-from-somali/"target="_blank">African Union request,</a> made through a diplomatic document called a note verbale, came amid recent tension between Burundi and the AU.</p> <p>The AU has called on Burundi, criticised abroad for its record on human rights, to ease its hardline stance on dissent and talk with its exiled opposition.</p> <a style="font-size:16px; font-color:yellow;" href="http://www.africanews.com/2018/12/02/burundi-clashes-with-au-over-arrest-warrant-against-ex-vice-president/"target="_blank"><span class="caps">READ</span> <span class="caps">MORE</span>: Burundi clashes with AU over arrest warrant against ex-President</a> <h2 style="font-size:16px;">What’s at stake for Burundi?</h2> <p>A key consequence of an eventual troop drawdown is financial.</p> <p>Participation in Amisom is a valuable source of hard currency, and the scaleback is likely to have a big impact on Burundi — every quarter, the AU pays it around $18 million.</p> <p>That represents a major source of foreign currency for Burundi, which has seen funding from the European Union suspended over human rights issues.</p> <p>Burundi soldiers also earn much less once they return from serving with Amisom, and an AU official who asked not to be named said they were poorly equipped, and thus logical candidates for the first phase of departures.</p>