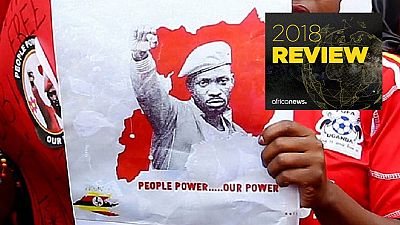 Before joining politics, Bobi Wine perhaps thought he could effect social change through his music. It had undoubtedly made him as many lovers as haters in the East African country and beyond.

But it was when he decided to challenge President Yoweri Museveni over the age-limit debate that he attracted more attention beyond the region, across the continent and around the world.

Wine had Kampala whining for the better part of 2018, his red beret movement and ‘Ghetto President,’ labels clearly irked the powers that be. Then he took center stage in a parliamentary fracas on the age-limit vote.

The vote was eventually passed to allow Museveni stay beyond the next elections. Then came the Arua by-election which the ruling National Resistance Movement, NRM, was forced into after its MP was assassinated.

Bobi Wine’s driver was shot and killed supposedly by state agents. Wine says he was the target but had managed to escape. The official account said it had happened after a lead car in the president’s convoy on campaign was stoned.

Wine and aspiring MP were among over thirty persons detained over the violence. He was arraigned before a military court later, charges dropped but immediately rearrested and hurled before a magistrate – the trial is till on.

In the end, the candidate he was backing won the seat despite being in custody. Then the next leg of Bobi Wine’s hustles, he was blocked from traveling abroad to seek medical treatment.

The back and forth with authorities continued till eventually he was allowed to fly out. He alleged torture at the hands of presidential security branch, government rubbished the claims.

In the States, he held an international press conference denouncing government’s muzzling of dissent. His return was another dramatic episode, extensively covered since his boarding in the United States transit in Nairobi and arrival at Entebbe.

Security forces were widely deployed, he was snatched at the airport and all welcome processions successfully thwarted by the authorities.

In the end, he was ‘escorted’ back home, police said. He has since been under an officially unofficial media blackout. The last major interview he had was in Kenya. And he has also granted Africanews an exclusive interview.

Bobi Wine is up against Ethiopian Prime Minister Abiy Ahmed, the Ebola responders in the Democratic Republic of Congo and Paul Kagame for his work as 2018 President of the African Union.