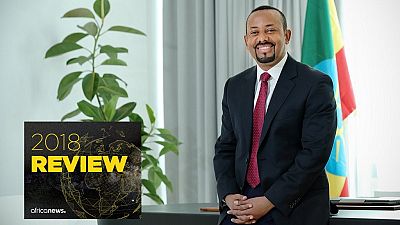 It is that time of the year again when we look back on the news year and pick a person or institution that impacted the news over the course of the last twelve months.

Ethiopian Prime Minister Abiy Ahmed shot into the news circle in March when the ruling coalition nominated him to become the head of government. Ethiopia at the time was suffering anti-government protests.

Since replacing Hailemariam Desalegn in April 2018, Abiy has all but turned the country downside up. Internally, the political and democratic space has been opened with multiple opposition groups returning home from exile.

Abiy has also opened Ethiopia up to fellow Africans with ease in visa application and implementation of a visa on arrival policy in early November. The peace deal with Eritrea is well documented and the drive to get women participation has been welcomed home and abroad.

But in all of this, there are challenges. Insecurity and allied displacements. Ethnically motivated attacks led to deaths and shot Ethiopia to the top of the world’s biggest population in the area of internal displacements.

Government has emphasized that it will do all it takes to ensure a durable security but the situation cools off and almost immediately returns. On occasions, the federal forces had been deployed.

Abiy’s decisions has also largely won Ethiopia more goodwill from international partners and global lenders, another of his headaches is the demand that reforms trickle further down.

The 42-year-old former peacekeeper and at present Africa’s youngest head of government is a nominee for our 2018 Personality of the Year. Voting opens on December on Twitter.

Abiy is up against Ugandan lawmaker, musician Robert Kyagulanyi [Bobi Wine], the Ebola responders in the Democratic Republic of Congo and Paul Kagame for his work as 2018 President of the African Union.