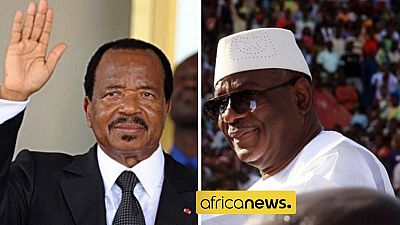 While the year 2018 was a transitional year for some countries, which changed their leaders through the ballot box, some other countries like Cameroon and Mali decided to renew their allegiance to their presidents.

The third part of the 2018 elections review gives a brief insight on how election was carried out in Cameroon and Mali.

The 2018 presidential elections in Cameroon witnessed some happenings which completely changed the traditional system; election-proclamation of result, to feature a heated court exchange between the state and the opposition.

A lot of people wished this election could be the end of the 36 years rule of President Biya who took over from Ahidjo in 1982, but all hopes were dashed when he announced his intention to run.

The elections took place in a tensed atmosphere with security threats in the North West and South West regions which has plagued the country for over two years.

Barely two days to the polls, two opposition candidates, Akere Muna and Maurice Kamto formed a coalition after several failed attempts by all opposition leaders to come together to unseat Biya, marking the very first time the country has witnessed a coalition.

Amidst growing tension, the election was conducted hitch free but massively boycotted in the restive Anglophone regions due to security threats.

Twenty-four hours after the polls, Maurice Kamto declared himself winner during a press conference in Yaounde stating that figures he received indicated that he had majority of the votes. Such claims were watered down by the government stating that only the constitutional council had the right to proclaim results.

The Constitutional Council later declared Paul Biya winner with 71% of votes,and he was sworn in for another 7 years term on Tuesday, November 6.

Unable to secure an all out victory in the first round, Ibrahim Boubacar was declared victorious in the presidential race, after amassing 67% of the votes in a run off with main oppostion leader Soumaila Cisse.

The constitutional court in the country gave a green light for a run off to take place on August 12 after results of the first round indicated that no candidate was able to reach the 50% threshold to be declared winner.

Meanwhile several opposition candidate rejected result tallies and called for recounts of some ballots, but the president of the court declared such petitions “inadmissible”.

Despite the fraud allegations filed by Soumaila Cisse, Keita’s major challenger in the elections , Ibrahim Boubacar was declared winner of the elections by the apex court and was sworn in on September 4,2018.

However, Mali’s vote was marred by insecurity which caused many of the voters to boycott the run-off presidential election.