Leadership of ex-Ogaden rebels return to Ethiopia from Eritrea 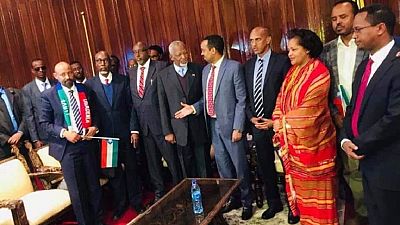 Leadership of the Ogaden National Liberation Front, ONLF, a former rebel group in eastern Ethiopia returned to the country on Saturday from their base in Eritrea.

Led by Admiral Mohamed Omar, the delegation arrived at the Bole International Airport where there were received by Finance Minister Ahmed Shide and president of the Somali Regional State, Mustafa Omer.

Their return comes barely two weeks after hundreds of its fighters flew from the Eritrean capital, Asmara, to SRS capital Jijiga.

From Addis Ababa, where the delegation is expected to hold meetings with federal government representatives, they will continue to Jijiga. Reports indicate that there is an elaborate preparation for their arrival in the capital.

ONLF is one of former anti-government groups that were branded terrorist entities by the Ethiopian government. These groups were harboured by Eritrea during decades of a standoff sparked by a border war between the two.

Earlier this year, Prime Minister Abiy Ahmed tabled a motion that saw the parliament remove a number of the groups from the list. The groups including the Oromo Liberation Front, Ginbot 7 and ONLF all announced cessation of hostilities with the view to return and pursue peaceful politics.

Jigjiga stadium is well decorated for reception ceremony of ONLF executive committees.
We are so thankful to Eritrea President Kudos Asias who had helped ONLF selfless in our difficult times. We are also thankful to our fallen heroes who paid the ultimate sacrifice EritreanPress pic.twitter.com/suBsmufdnw