<p>Two university students were shot dead by police in the Democratic Republic of Congo within the space of four days.</p> <p>The Kinshasa University students were protesting to seek the resumption of classes by striking lecturers.</p> <p>Reports indicate that a first student was shot on Monday during the protest. The student died on Thursday birthing more a new protest.</p> <p>Police confirmed that riots on Thursday had also resulted in a second death which resulted from the discharge of police rounds.</p> <p>A dozen police officers are reported to have been injured. Photos shared by the <span class="caps">BBC</span> correspondent in the country shows vandalized properties on the campus.</p> <p>Building blocks and vehicles had been burnt purportedly by the rioting students. <span class="caps">DRC</span> police have long been blamed of highhandedness especially on protesters.</p> 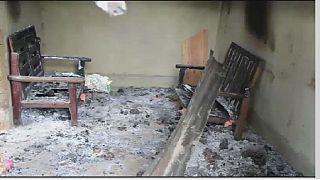