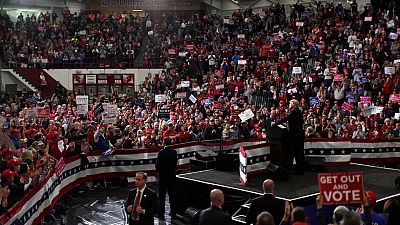 <p><strong>A principal of the African American Research Collaborative (<span class="caps">AARC</span>) recently said African American voters are largely united around their dislike for President Donald Trump.</strong> </p> <p>Henry Fernandez leads the <span class="caps">AARC</span>, a political consulting firm that has conducted extensive polling of African Americans ahead of the U.S. midterm elections, which many experts consider a referendum on Trump’s presidency.</p> <p>“The number one issue certainly is Donald Trump. African American voters in our polling, but also in polling by other companies, really don’t like Donald Trump. The emotion that Donald Trump generates, the two big emotions are anger on the one hand and disrespect on the other,” said Fernandez.</p> <p>The polls echo sentiments on the street.<br /> “It is clear that he has such disdain for people of color,” said Dan Reed, a Democratic voter in Maryland.</p> <p>Sixty-nine-year-old Democrat Donna Graham-Harris came of age during the civil rights movement of the 1960s.</p> <p>“I was around with Nixon and Reagan. They never disrespected us. They may not have liked us to a certain degree, but they did not disrespect us as a race,” she said.</p> <p>Trump courted the black vote during his presidential campaign. As president, he often brags about low rates of black unemployment. But polling suggests most African Americans haven’t seen a significant rise in wages, and they don’t credit Trump for the strong economy.</p> <p>He has inherited these improving economic conditions because of President Obama, and he certainly doesn’t deserve credit for them,” Dan Reed said.</p> <p>Trump has welcomed the support of high-profile African Americans like rapper Kanye West.</p> <p>Fernandez said his institution polled in particular the question of how African American voters feel about Kanye West supporting Donald Trump. The result, he said, shows that Kanye West actually has a negative impact on black voters in regards to their perceptions of Trump.</p> <p>But disdain for Trump alone may not be enough to drive high African American turnout.</p> <p>“Democrats certainly are going to always get the majority of the black vote, but that’s not enough. It’s not a question of what percentage of the black vote they get, it’s what percentage of the black vote turns out to vote. And that really comes down to issues,” Fernandez said.</p> <p>African American turnout will come down to whether candidates have been speaking to the issues black voters care about, including tighter gun control measures, expanded health care coverage and an increase in the national minimum wage, he explained.</p>

The number one issue certainly is Donald Trump. African American voters in our polling, but also in polling by other companies, really don't like Donald Trump.