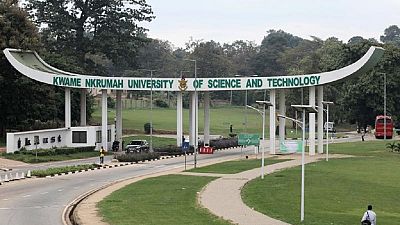 Local media portals in Ghana are reporting that the country’s top science and technology university has been indefinitely shutdown by authorities following a violent student protest on Monday.

A joint police and military team was deployed on Monday in Ghana’s Ashanti regional capital, Kumasi, to quell violent protests by students of the leading public university.

Students of the Kwame Nkrumah University of Science and Technology, KNUST, went on a planned protest which led to vandalizing of vehicles and parts of the varsity’s administration block.

The student leadership had called the demonstrations in protest against police brutality. Eleven students were arrested in a police raid late last week on charges of illegal assembly and violent behaviour.

The state-owned Daily Graphic quoted an Student’s Representative Council, SRC, statement as calling for a boycott of lectures in order for the protests to be held.

“The KNUST SRC Executive Council in joint forces with SRC Parliamentary Council and all Student leaders brings to the notice of all KNUST students that we are embarking on a demonstration tomorrow 22nd October, 2018. NO LECTURES TOMORROW. We have had enough,” the statement said.

The protests took a violent turn with students smashing over twenty vehicles on campus and setting ablaze motorbikes and bicycles. A school bus was also reportedly torched by the irate students.

The sudents held placards that called for the president’s intervention in the crisis. ‘We are students not criminals,’ ‘Students are not safe anymore, Obiri Danso (i.e. the Vice Chancellor) must go,’ ‘Is it a crime to be a student,’ were some of the messages the placard bore.