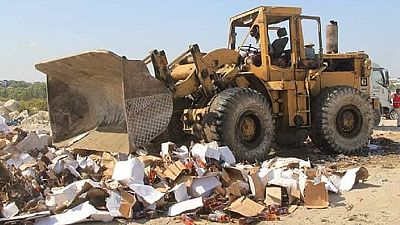 Customs and police authorities in Somalia seized and destroyed on Thursday a container full of contraband alcohol.

The consignment was being smuggled via the Mogadishu port, Radio Dalsan, a local outfit said. A similar seizure was made at the airport.

The container is said to have 905 boxes of alcohol that had the label, King Lion, described as a premium quality whisky with 40% alcohol content.

Photos showed the consignment being bulldozed under the keen watch of the relevant authorities.

A local journalist added that authorities had confirmed to the media that another contraband alcohol consignment had been seized at the airport on the same day.

The reports did not disclose where the impounded products were coming from and or the persons or institutions behind the shipment.

Somalia is a predominantly Muslim country with strict regulations on alcohol use. The country has a long coastal line making it a crucial player in sea transport.

The country is suffering from insurgent activities by the al-Shabaab militants who are fighting government in a bid to impose a strict interpretation of Shariah – Islamic law.