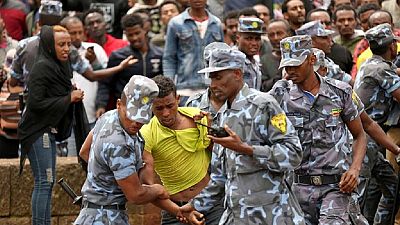 Ethiopian authorities have freed over 1,100 youth arrested over violent protests in and around the capital Addis Ababa in September 2018.

Police chief Jemal Zeinu confirmed that out of the 1,204 youth were detained – according to Amnesty International, arbitrarily – 83 of them are to be put before courts on suspicion of committing crimes.

Zeinu in an interview with state-affiliated FBC disclosed that the soon-to-be released detainees had undergone a month-long training in the area of staying away from crimes and other related issues..

While the Ethiopian authorities have in recent months made a commendable attempt to empty the country’s prisons of arbitrary detainees, they must not fill them up again by arbitrarily arresting and detaining more people without charge.

“If the necessary logistic are fulfilled, they will be released on Thursday (October 18); or else, they will be freed latest by Saturday,” he added. FBC and other local portals confirmed they had been released.

Authorities added that those found to be without employment were to be engaged in various work sectors by organizing them in micro and small enterprise in collaboration with the city administration.

Violence that raged from Sept. 12-17 and included attacks on minorities in Ethiopia’s ethnic Oromo heartland outside Addis Ababa, was a blow to new Prime Minister Abiy Ahmed’s efforts at reconciliation.

Amnesty International’s Director for East Africa said in a statement: “While the Ethiopian authorities have in recent months made a commendable attempt to empty the country’s prisons of arbitrary detainees, they must not fill them up again by arbitrarily arresting and detaining more people without charge.

“The government must renew its commitment to a new era of respecting and upholding human rights. The majority of people were arrested for perceived offences which are not recognised criminal offences under international law, such as smoking shisha or consuming khat.

“They must be either charged with a recognizable criminal offence or released. Those arrested for taking part in protests on the recent ethnic clashes must all be released immediately and unconditionally,” Joan Nyanyuki stressed.

Back in September police admitted the arrests and spoke about a rehabilitation process: “1,204 are in custody, but they are now being rehabilitated for a short period of time,” the police commission’s Degfie Bedi said.

The arrested included people suspected of holding “illegal rallies”, burglaries and other crimes, he added.