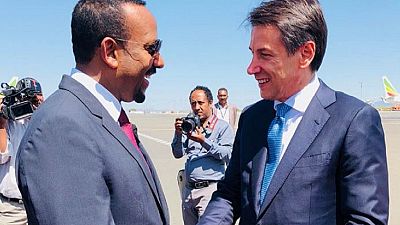 <p><strong>Italy’s prime minister Giuseppe Conte has called on investors from his country to take advantage of the new wave of peace in the Horn of Africa region.</strong></p> <p>Conte, who was hosted to a state dinner by Ethiopia’s prime minister Abiy Ahmed, commended the peace deal between Ethiopia and Eritrea, while also applauding the ongoing reforms championed by his host.</p> <p>State affiliated Fana Broadcasting reported that the two leaders agreed to cooperate in several sectors including infrastructure, investment and trade.</p> <p>They reportedly also agreed to collaborate in rehabilitating refugees and returnee soldiers.</p> <p>ReliefWeb, a leading humanitarian information source on global crises and disasters, last month said there has been a <a href="http://www.africanews.com/2018/09/28/eritrean-refugees-in-ethiopia-spikes-after-border-reopening/"target="_blank">spike</a> in Erirean refugees enetering Ethiopia, following the reopening of borders.</p> <p>During Conte’s two-day working visit, the two countries signed loan and grant agreements worth $25m, Fana reported.</p> <p>Conte is expected to travel to Eritrea on Friday, where he will meet president Isaias Afwerki.</p> <blockquote class="twitter-tweet" data-lang="fr"><p lang="en" dir="ltr">Italy's Prime Minister, Giuseppe Conte will arrive in Asmara, in the mid-morning hours tomorrow, for an official one-day visit. The Prime Minister will discuss bilateral cooperation as well as regional/international matters of mutual interest with President Isaias Afwerki. <a href="https://t.co/10MvCZ8yBR">pic.twitter.com/10MvCZ8yBR</a></p>— Yemane G. Meskel (@hawelti) <a href="https://twitter.com/hawelti/status/1050307894544089088?ref_src=twsrc%5Etfw">11 octobre 2018</a></blockquote> <script async src="https://platform.twitter.com/widgets.js" charset="utf-8"></script>