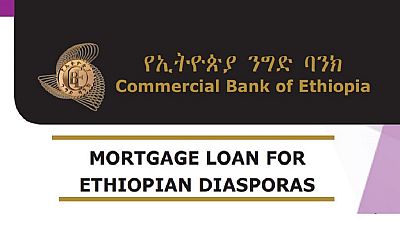 The Commercial Bank of Ethiopia, CBE, has announced plans to woo nationals in the diaspora with mortgage loans.

The bank in a statement issued on Friday said, the persons targeted are non-resident Ethiopians and foreign nationals of Ethiopian origin.

CBE chief Bacha Gina, during a stakeholder meeting held earlier this week in the capital Addis Ababa said the product was part of the bank’s vision to serve and grow together with its customers.

“He added that the mortgage loan would benefit non-resident Ethiopians and foreign nationals of Ethiopian origin. Credit Quality Assurance Director, W/ro Emebet Melese explained to the diaspora how the loan could be facilitated.

“Business Development Vice President,  Ato Yishak Mengesha, on his part  briefed the diaspora about the bank’s background, where it stands now and its vision,” the CBE statement added.

The bank is the country’s largest commercial bank which as of June 2015 was estimated to be worth about 303.6 billion Birr in assets and held approximately 67% of deposits and about 53% of all bank loans in the country.

Details on CBE’s mortgage loans for Ethiopians in diaspora

As part of Prime Minister Abiy Ahmed’s economic reforms, there has been a bold move to allow significant private involvement in a hitherto state-controlled economy.

In late August, Abiy after chairing a Macroeconomic Committee issued a number of forex regulation adjustments for a country that has long suffered a dollar crunch.