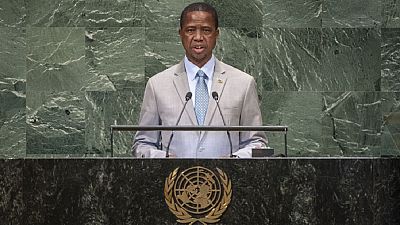 Zambian president Edgar Lungu says the country is implementing a policy meant to protect girls from dropping out of school. The issue took prominence when Lungu addressed the 73rd United Nations General Assembly on October 25.

In outlining Zambian policies on gender equality and women empowerment, Lungu said government was readmitting girls who left school to give birth.

Girls were also benefiting from free sanitary pads – the lack of which had been a block to their education. He also addressed measures by way of legislation being put in place to eliminate violence against females.

I further wish to mention that the continuous implementation of the re-entry policy for pregnant girls is a success, as a number of girl children have been retained in school after giving birth, a measure we believe is critical in promoting equal opportunities for girls.

“Since last year, 2017, my Government commenced the distribution of free sanitary towels to girls in rural and per-urban areas in an effort to retain
then in school.

“This is out of the realisation that the lack of proper sanitary towels, limits girls’ access to education. I further wish to mention that the continuous implementation of the re-entry policy for pregnant girls is a success, as a number of girl children have been retained in school after giving birth, a measure we believe is critical in promoting equal opportunities for girls.”

His position is markedly different from one recently advanced by Human Rights Watch, HRW, who accused government of failing to enforce a 1997 re-entry policy.

“… many young mothers are still dropping out of school, because the government isn’t putting the policy into practice,” HRW’s Senior Coordinator for Children’s Rights Susan Raqib, wrote in a piece titled: “Zambia Should Keep Young Mothers in School – Don’t let Pregnancy Be a Barrier to Education.”

Other portions of Lungu’s remarks on gender empowerment

On gender equality and women’s economic empowerment, I wish to reaffirm the commitment of my Government to eliminating all forms of violence and discrimination against women and girls. A conducive policy and legislative environment is further strengthened through the review and enactment of new
legislation and policies that are gender responsive.

Consequently, the implementation of 50-50 Enrolment Policy is making head ways as schools are now compelled by law to enrol an equal number of girls and boys.

I am pleased to inform you that our traditional rulers in all parts of the country including in the remotest areas, have come out in full force in fighting child early and forced marriages. We believe that these and many other efforts will lay a strong foundation for the attainment of sustainable development goals and in particular goal number five (5), on gender equality and women’s economic empowerment.