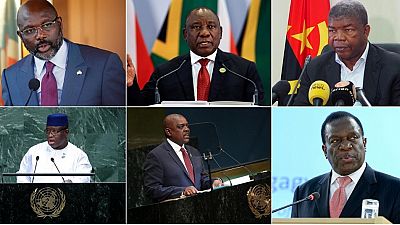 Over a hundred Heads of State and government leaders are currently gathered at the UN Headquarters in New York, where they are attending the 73rd United Nations General Assembly, UNGA.

Among the dozens of African leaders who are in attendance, six of them; Julius Maada Bio of Sierra Leone, George Weah of Liberia, João Lourenço of Angola, Cyril Ramaphosa of South Africa, Emmerson Mnangagwa of Zimbabwe and Mokgweetsi Masisi of Botswana are attending this event for their very first time since they took office in their respective countries.

Julius Bio made it for the first time at the UNGA since his election in April as President of the Republic of Sierra Leone.

A statement released by the Office of the Presidency revealed that Bio and team will connect with business leaders and development partners on matters ranging from education, health, peace and governance to economic development.

Whilst in the United States of America, President Bio will also address Sierra Leoneans in a Town Hall Meeting as part of his commitment to open government and public accountability.

The Liberian president, George Weah also answered present at the 73rd United Nations General Assembly in New York, the first he is attending since he assumed the role as president in January.

According to an Executive Mansion release, Weah’s address at the United Nations General Assembly (UNGA) proffered the agenda of Liberia on the global stage.

The 73rd United Nations General Assembly is João Lourenço’s first participation as Angolan Head of State, as he marks his first year in office.

His address during the meeting focused on the implementation of global measures in the areas of peace, justice, society, economy and health.

He highlighted issues such as arms control, promotion of human rights, socio-economic development, and coordination of humanitarian assistance in the world and prevention of chronic diseases, tuberculosis, malaria and AIDS.

João Lourenço became the third president of the African nation, after his party secured 61% picking 150 seats in the 220 seater parliament.

He replaced Jose Eduardo dos Santos, who stepped down after 38 years at the helm of the nation.

This year’s gathering marks Ramaphosa’s inaugural participation in the UNGA as head of state and government.

According to his spokesperson Khusela Diko, Ramaphosa’s participation in the high level meeting was an occasion for him to outline South Africa’s domestic and foreign policy goals and priorities including the country’s land reform aimed at fostering greater stability, inclusiveness, and transformation within the South African economy.

He ascended the throne of the Southern African nation a day after Zuma resigned under mounting pressure from the party, the African National Congress, leaving both the leadership of the ANC and the continent’s second-biggest economy in the hands of Ramaphosa.

After the parliamentary vote, the businessman was later sworn in as South Africa’s fifth post-apartheid president.

Zimbabwe’s president Emmerson Mnangagwa is one of the African leaders who made his first appearance during this edition of the United Nations General Assembly in New York.

In his maiden address, delivered on September 26, he reiterated that his country is open for business, and outlined steps to end poverty and corruption.

Mnangagwa took over the steering of the country on 24 November 2017 after his predecessor Robert Mugabe was forced to resign. Following the July 30 general elections, he recorded victory against his main opponent Nelson Chamisa to maintain his position as president.

While all the others are outright news comers, Mokgweetsi Masisi on his part will be treading on familiar grounds. This was the first time in 10 years, a Botswana sitting President addressed the United Nations General Assembly.

While officially attending the meeting for his first time since he took office as president, Masisi has represented the former president Ian Khama on several occasions in his capacity as vice president.

The ex-vice president took over power from Ian Khama, who stepped down after his term limit – 10 years was reached. On April 1, 2018, he was sworn in as the 5th President of Botswana while elections have been scheduled for next year.