Eritrea – Ethiopia accord, template of peace – Micronesia prez at UN 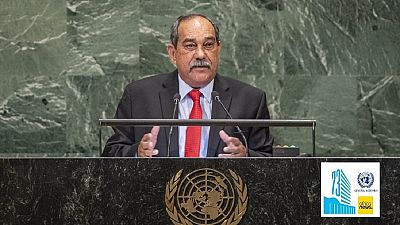 The Ethiopia – Eritrea peace deal continues to attract applause from governments across the world, the latest being the Federated States of Micronesia.

Micronesia president, Peter Christian, mentioned the Ethio – Eritrea peace process during his address as part of the general debate at the United Nations General Assembly, UNGA.

Under the area of global peace in his address, the president said: “To wish for peace is global. It has no boundaries. Micronesia is encouraged by the peace reached by Eritrea and Ethiopia, and we wish the people of those countries the very best.

“We also wish that other countries who are engaged in conflicts that similar resolutions be achieved,” he added. The leader of Costa Rica also stressed the deal stating that the country was happy at the feat.

The two have also recently signed another deal in the Saudi Arabian city of Jeddah where they were awarded gold medals for their resolve to reunite their respective countries. They had earlier received similar honour from the Crown Prince of the United Arab Emirates.

Hope for the Koreas

The Micronesia president continued to address peace process in the Korean peninsula and stressed the need for world leaders to do all it takes to bring peace in troubled regions and to also help consolidate peace in other areas.

In our region of the world, we have a stake in the ongoing peace negotiations between the Democratic People s Republic of Korea and the Republic of Korea. We recognize and encourage the continuing efforts to bring peace and stability to the Korean Peninsula.

A lasting peace on the peninsula translates to a more secure and stable Pacific Region. Elsewhere in the world, we cannot ignore the pain and suffering of so many people caught in pockets of armed conflicts. As world leaders, we have fallen short of our responsibilities.

It is deeply troubling to see those who wield tremendous powers, fail to take bold and decisive actions to end these serious atrocities. And we wonder if for some unknown reason such conflicts might not be good for them politically or even economically.