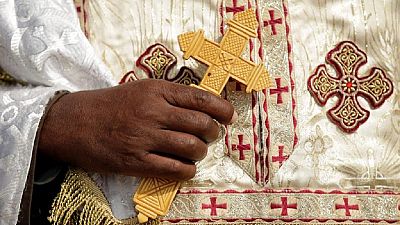 On the ground and online, orthodox Christians in Ethiopia and Eritrea are commemorating the Meskel festival, the founding of the true cross on which Jesus was crucified.

Reports indicate that the Ethiopian Orthodow Tewahdo Church held a procession at the Meskel Square in Addis Ababa.

The colourful and elaborate ceremony was attended by President Mulatu Teshome and deputy mayor of the capital, Takele Uma.

Today’s procession saw participants including priests and students dressed in long white religious robes and head gears amid singing of spiritual songs whiles they circle the bonfire which is fuelled by firewood decorated with daisies prior to the celebration.

In #AddisAbeba the religious procession of #Mesqel, (founding of the true cross) by the Ethiopian Orthodox Tewahido Church has started at the Mesqel Square in the presence of religious leaders from Churches in the city & their choir; Pres. Mulatu Teshome & deputy Mayor Takele Uma pic.twitter.com/4EHbtNdP6N

What is Meskel about?

The annual event which falls on September 27 or September 28 in a leap year commemorates the fourth century discovery by Roman Empress Saint Helena (Queen Eleni) of the True Cross on which Jesus Christ was crucified.

The festival, is also celebrated by Eritrean Orthodox churches. It is marked by the burning of a large bonfire and a procession (Demera) which witnesses tens of thousands of adherents and tourists gather at the Meskel Square.

The procession is either held on the evening before the festival or on the day itself. Little processions are also held at homes and rain is expected at the end of the event to put out the fire. If the rain falls, the year is expected to be prosperous.

Ashes from the remains of the fire is collected the next day and used to mark the foreheads of faithful with the sign of the cross. A feast is held afterwards. It is also held in Eritrea’s capital Asmara and other parts of the country.

The candles are lit, the fire is burning, the fireworks are popping ? . Melkam Meskel (Happy Meskel) to all #Ethiopia pic.twitter.com/XIyvCAUddY

To all #Ethiopians who are celebrating Mesqel both for religious and cultural purposes, team AS wishes you a Happy #Mesqel! pic.twitter.com/6y2T4MwE5e

መልካም የመስቀል በዓል!
We wish you a happy and blessed #Meskel Holiday for those who celebrate! pic.twitter.com/HiVNI5mJDF

Happy #Meskel Celebration from all of us at Ethiopian Airlines. pic.twitter.com/M53JhWoL1B

Ethiopiaaaa Melkam yemeskel Baal!
The month of September is an important month of celebrations in Ethiopia. The new year and Meskel. Meskel celebrations commemorate the discovery of the cross on which Jesus Christ was crucified by St. Helena, According to legend, in the year 326 pic.twitter.com/maeusJLO1A

Melkam Meskel! I wish Happy Meskel Festival to all my Ethiopian friends who celebrate the Finding of the True Cross. pic.twitter.com/6a6u9W0mHs

This #bonfire is extraordinary. It is said to be 500m long.#Mesqel #Ethiopia #Orthodoxy #Culture #Tradition pic.twitter.com/T2f6RzMhBS