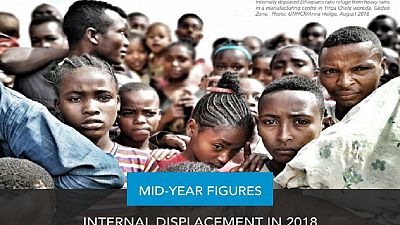 <p>Ethiopia’s internal security lapses coupled with floods in parts of the country have earned them the unenviable record of global leader in internally displaced persons.</p> <p>According to the Geneva-based group, Internal Displacement Monitoring Center, <span class="caps">IDMC</span>, Ethiopia currently had about 1.4 million internally displaced persons for the first half of this year (January – June 2018.)</p> <p>“The humanitarian situation in Ethiopia deteriorated significantly in the first half of 2018,” <span class="caps">IDMC</span> said in its current report.</p> <p>The country has 200,000 more internally displaced than Syria in second place. Five African countries follow in third to seventh spot – Democratic Republic of Congo, Nigeria, Somalia, Central African Republic and South Sudan.</p> <p><img src="https://static.euronews.com/articles/54/51/545161/1024x576_bonus-20122.jpg" alt="" /></p> <p>Ethiopia’s figures included: 171,000 persons displaced by floods in four regions. New conflict in West Guji and Gedeo zones, along the border between the Oromia and Southern Nations, Peoples and Nationalities (<span class="caps">SNNPR</span>) regions, triggered more than a million new displacements.</p> <p>Intercommunal violence along border areas of the Oromia and Somali regions also played a role. Going by the figures, the overall number of new displacements increased sharply compared to the 213,000 reported during the same time period last year.</p> <h2 style="font-size:16px;"> Summary of report </h2> <p>There were about 5.2 million new internal displacements associated with conflict and violence in the first half of 2018, based on the analysis of data from the 10 worst-affected countries. There were also about 3.3 million associated with disasters in 110 countries and territories. </p> <p>Sub-Saharan Africa was disproportionately affected by displacement associated with conflict and violence, accounting for six of the 10 countries with the highest figures. Countries in the Horn of Africa bore the brunt of displacement more broadly. </p> <p>On top of more than 1.7 million new displacements associated with conflict and violence in Ethiopia and Somalia, significant numbers of people fled devastating floods and drought in both countries.</p> <h2 style="font-size:16px;"> <span class="caps">IDMC</span> figures and sources </h2> <p>The figures in this publication represent provisional estimates<br /> for the number of new displacements which occurred between 1 January and 30 June 2018. The figures are based on data which <span class="caps">IDMC</span> was able to verify by the time of publication.</p> <p><span class="caps">IDMC</span> figures come from a range of sources, including national and local governments, the UN and other international organisations, the Red Cross and Red Crescent societies, civil society and the media. </p> <p>To calculate the best possible displacement estimates, our monitoring experts triangulate sources and validate figures across a range of partners. </p> <a href="https://twitter.com/AlfaAfrican" class="twitter-follow-button" data-show-count="false">@alfaafrican</a><script async src="//platform.twitter.com/widgets.js" charset="utf-8"></script>