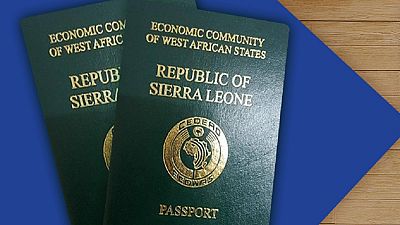 Corrupt Sierra Leonean officials have been selling fraudulent service and diplomatic passports for thousands of dollars to individuals hoping to use them to enter the United States, the country’s anti-corruption commissioner told Reuters.

Africa has a thriving black market for illegal passports, prompting the United States, Britain and others to tighten visa regulations for countries where the issue is most acute.

In Sierra Leone, a recent investigation uncovered a large network of bureaucrats selling passports for up to $7,000 and assisting buyers to apply for US visas with them, said Commissioner Francis Ben Kaifala, who was appointed last June.

There have been many, many people to gain access to the US this way, with passports that were not proper. It’s systemic.

“We have evidence of high-ups at the Ministry of Foreign Affairs and the Immigration Department participating, and neither agency has much, if any, control over it,” he said in an interview on Thursday.

“There have been many, many people to gain access to the US this way, with passports that were not proper. It’s systemic.”

Representatives of the foreign ministry and the immigration office declined to comment.

The investigation follows a request from the U.S. government in 2017 for the West African country to tighten its passport-issuing procedure after a higher-than-average number of Sierra Leoneans visiting the United States were found to be overstaying their visas.

On Monday, nine people were arrested by Anti-Corruption Commission (ACC) officers assisted by US Embassy security and consular personnel for attempting to apply for visas with fraudulent service passports, which are meant to be used only by government employees for work-related travel.

Among those detained was Alieu Kanu, Sierra Leone’s former ambassador to the United Nations, who the ACC alleges organised the sale of the passports and accompanied the buyers to add credence to their applications.

Kanu’s lawyer did not respond to requests for comment.

According to the anti-corruption commissioner, several unnamed foreign ministry and immigration department officials were arrested on charges relating to the investigation two weeks ago, while the former minister of immigration is currently on the run after a warrant was issued for his arrest last week.

In September 2017, the US suspended the issuance of short-term visas for foreign ministry and immigration officials who had applied in Freetown. It said the restriction could be extended to other citizens if Sierra Leone did not takes steps to establish reliable processes for issuing travel documents to and from the United States.

“This passport cartel is a major reason for (Sierra Leone’s high overstay rate),” Kaifala said. “People who obtain these illicit passports are not travelling with the intent of coming back. They say they’re going for a conference or visiting family and just stay.”

Fake passports are a problem across the continent. In 2017, the UK and New Zealand ended visa-free travel programmes for South Africa due to high levels of counterfeit and fraudulently obtained document use.

In 2015, Guinea-Bissau announced that more than 1,600 people had been found to be using service and diplomatic passports acquired through illicit means.