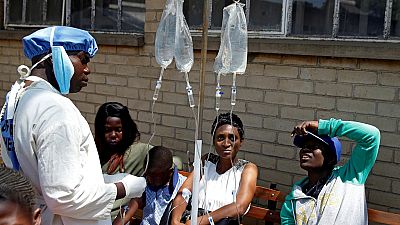 Zimbabweans on social media are reacting to news that government has set up an emergency crowdfund to solicit support in the fight against the prevailing cholera epidemic.

The newly appointed finance minister, Mthuli Ncube took to Twitter with the news, asking his followers to support the fund through donations.

‘‘Together with my colleagues at Min of Health, we have set up an auditable emergency crowdfund to further efforts to fight cholera to date. Together we can win!’‘ read part of the tweet.

Together with my colleagues at Min of Health, we have set up an auditable emergency crowdfund to further efforts to fight cholera to date. Together we can win!

On Tuesday, government declared a state of emergency in the capital Harare, after more than 3,000 people had been infected by cholera.

On Wednesday, police announced a ban on all public gatherings as the health minister Obadiah Moyo told a meeting of government departments, the disease had now spread outside the capital.

25 people have died of cholera, since the beginning of the outbreak on September 6, 2018, the health minister said on Thursday.

The health ministry has also been receiving several donations and offers of support from private organisations including $10 million from Econet Wireless, $100,000 from the President’s Fund and logistical support from Quest Motors.

“Since declaration of the outbreak as a disaster, we have been receiving assistance from different organisations and corporates. These include local and foreign companies. I am thrilled by the assistance that continues to come through,” Moyo said.

Use taxes, not donations

Comments from Zimbabweans on social media, were however not that generous.

This morally & financially bankrupt, deceitful Zimbabwe Gvt wants us to donate money to help tackle cholera pandemic through crowdfunding. THEY SHOULD BE ASHAMED! Taking the citizens for idiots. WHAT IS THIS LUNACY??

This is just an insult! Zimbabweans pay taxes that are supposed to keep the health services running. Now they must donate to a Crowdfund too?! Maybe if the Mugabes had been made to pay back ill-gotten gains after the coup the government would have more money? #Zimbabwe https://t.co/nvXv7jGJTe

Crowdfunding when they collect tax. They shld be asking citizens to crowd fund the purchase of new vehicles for ministers, then use tax dollars to run the country.

I am disappointed, all the same let me donate something as someone who has been blessed enough.

Prof forgive all the negative comments, thousands of patriotic Zimbabweans are with u on this noble endeavour. Just give us a SA account we will definitely help!