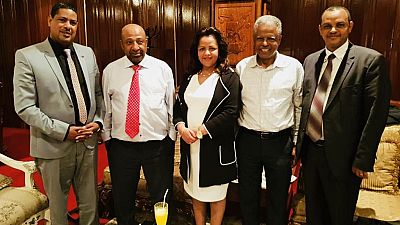 <p>The Ethiopian government has welcomed the leadership of former exiled rebel group, Patriotic Ginbot 7, PG7, back to the country.</p> <p>Prime Minister Abiy Ahmed’s chief of staff, Fitsum Arega, wrote on Twitter: “Our nation immensely benefits from a peaceful contest of ideas for in the final analysis we all care about our country’s wellbeing and we all cherish our children’s future.” </p> <p>His tweet was accompanied by a photo of PG7 leader and general secretary – Berhanu Nega and Andargachew Tsige together with other officials of the group.</p> <p>The group until July 2018 was considered a terrorist organization by the government. Parliament voted to lift that label on the group and others like the Oromo Liberation Front (<span class="caps">OLF</span>) and the Ogaden National Liberation Front (<span class="caps">ONLF</span>).</p> <p>Earlier in June, they announced a unilateral ceasefire – suspended all armed operations – with the view to engage in peaceful struggle.</p> <p>They returned to Ethiopia from their base in Eritrea last week. The return marked an end to PG7’s armed struggle against Addis Ababa in the wake of political reforms launched by Prime Minister Abiy Ahmed.</p> <p>Under the Abiy administration, Andergachew Tsige was pardoned despite being on death row. Abiy also met leader Berhanu Nega during a visit to the United States in August.</p> <p>The government said it had reached an agreement with key opposition parties over disarmament, demobilization and reintegration of ex-rebels.</p>