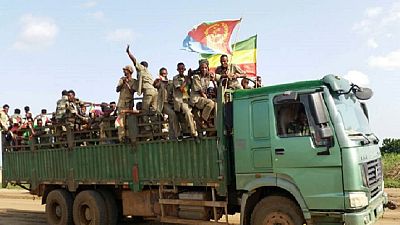 A famed Ethiopian opposition group, Patriotic Ginbot 7, have officially returned to the country from their base in neighbouring Eritrea.

State-run Fana broadcasting corporate reported that the group crossed into Ethiopia via the town of Humera on Saturday.

Humera is located in the northern Tigray region that shares a long border with Eritrea. Photos shared by Fana showed ‘ex-fighters’ in trucks waving Ethiopian and Eritrean flags.

The group until July 2018 were considered a terrorist organization by the Ethiopian government. Parliament voted to lift that label on the group and others like the Oromo Liberation Front (OLF) and the Ogaden National Liberation Front (ONLF).

Earlier in June, the group had announced a unilateral ceasefire – suspended all armed operations – with the view to engage in peaceful struggle.

The return marks an end to PG7’s armed struggle against Addis Ababa in the wake of political reforms launched by Prime Minister Abiy Ahmed.

Under the Abiy administration, one of its top officials Andergachew Tsige was pardoned despite being on death row. Abiy also met leader Berhanu Nega during a visit to the United States in August.