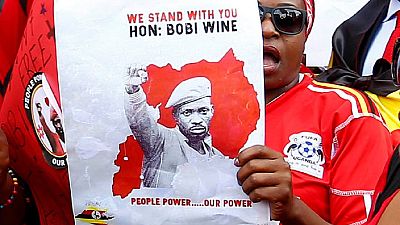 Operatives of Uganda’s presidential guard gravely tortured two serving lawmakers in the wake of a reported attack on the presidential convoy during a by-election in Arua.

According to Kassiano Wadri, the Member of Parliament-elect for the Arua municipality, musician turn lawmaker Robert Kyagulanyi popularly referred to as Bobi Wine and Francis Zaake were at the receiving end of the torture.

Wadri, who won the by-election despite being in detention, had been arrested along with over 30 others after president Museveni’s convoy was reportedly stoned by opposition supporters in Arua.

Then those of us who were harassed and beaten by police are a little better but the special forces command, the elite guard of the president really caused immense pain and torture to our people.

In an interview with the BBC Africa service he confirmed inhumane treatment especially at the hands of the police and revealed the ordeal that the two MPs went through after they were arrested.

“Yes, we were all beaten by police but of course the degree of battering differed. The Honurable Kyagulanyi Bobi Wine Robert, (it) was the elite guard of the president, they were the ones who arrested Bobi Wine and tortured him gravely.

“The same also applies to the Hon Zaake up till now is still in the hospital, he was very inhumanly treated. His palms cut, the beating that they metted to him was so great that even now, he is not himself as yet.

“Then those of us who were harassed and beaten by police are a little better but the special forces command, the elite guard of the president really caused immense pain and torture to our people,” he said.

His account is at odds with that of the president who insisted in a publication that Bobi Wine specifically had not suffered an injuries or fractures, citing assurances from the Ugandan army. Instead Museveni blamed media outlets for peddling fake news.

When Bobi Wine and other accused persons – referred to as the Arua 33 – finally appeared in court, the lawmaker could barely walk even with the aid of crutches. The state dropped a charge before a court martial before arraigning him in a civil court for treason.

Bobi Wine and the others have since been granted bail by the magistrate in the town of Gulu. The court ordered that they be given adequate medical care given the shape in which they appeared.

Their movements have been largely restricted with the MP-elect unable to visit his constituency due to court orders.

Reacting to the order, he said: “First of all, it is a very very unfair judgment as it were, although I respect the decision of the courts, it is very very unfair because the grounds on which they passed such a judgment on me was that if I make an appearance in Arua at this time, the people will rise up.

He stressed how his constituents were were eager to see him and how they had been forced to mute celebrations after the court granted him bail. He said soldiers had been deployed to quell any kind of protest in the constituency.

“I’m terrible upset that I am not able to go and interface with my voters. On that fateful day, my convoy never ever saw president Museveni let alone his convoy. But if justice prevails, let them go on the ground and the will know that there was nothing, this was a premeditated act,” he added.