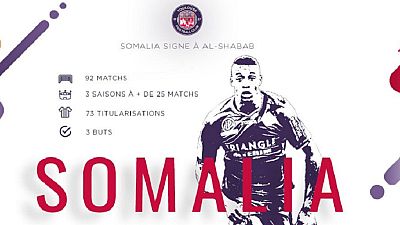 Wergiton do Rosario Calmon, better known as Somália, has played at Toulouse FC for three years but will be moving to Saudi football side Al-Shabab FC.

The Saudi club is not the only one bearing the name Al -Shabaab which is an Arabic phrase meaning ‘the youth’. There are other al-Shabaab football clubs in Syria, Iraq, Kuwait and Oman.

But for users on social media, the coincidence was too much. Many were struck by the fact that the jihadist group by the same names has been fighting for over over a decade to topple the government of Somalia in the Horn of Africa region.

Toulouse midfielder Somalia (Who has never played in Somalia) has joined Saudi Arabian side Al Shabab on a two-year deal. pic.twitter.com/vKzxVQQpzN

The al-Qaeda-linked al-Shabab has carried out a string of attacks across the region, and has it has taken the efforts of the United Nations and an African Union peacekeeping force to support the Somali government against al Shabaab.

Toulouse FC announced the move on Thursday and thanked 29 year old Somalia “for his professionalism”.