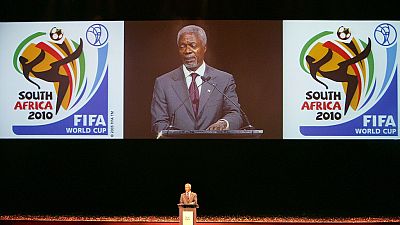 Kofi Annan, the deceased former United Nations Secretary-General made a name for himself in international civil service and diplomacy but other fields felt his impact.

Sports is one such area, subsequently, in the heavy flood of tributes in the wake of his demise, sports men and women and administrators have not been left out.

Indeed, Anna was seen as a crucial force in bringing the World Cup to Africa for the first time when South Africa hosted it in 2010.

Then Secretary-General Annan, delivered a speech at the official presentation of the FIFA World Cup 2010 logo in Berlin city centre, July 7, 2006. He also interfaced with FIFA on a number of occasions at their headquarters in Zurich, Switzerland, meeting then FIFA president Sepp Blatter often.

Condolences from SAFA on the passing away of former UN sec-gen Kofi Annan.
The former UN chief played a critical role in mobilising the world in embracing the FIFA 2010 World Cup.
MHSRIP pic.twitter.com/Bbj64q53ub

Blatter was among the first to issue words of condolence to ‘his friend’ in a tweet. The FIFA Secretary General, Fatma Samoura, formerly a UN employee also hailed Annan describing him as an icon.

There is a list of especially African footballers who crowned Annan with gold for his commitment to global peace and justice. Across the continent, two Brazalian greats weighed in, Pele and Ronaldinho shared views on ‘The Kofi Annan effect.’

Africanews continues its series on ‘The Kofi Annan effect’ looking specifically at how the world of football felt impacted by his demise.

Deeply touched by the passing away of Kofi Annan. Not only the world and Africa have lost a great leader for peace and humanity, but I have lost a friend. R.I.P. #Kofi Annan #Africa #UN #Noble Price #CAF

1/4 It was with sadness that I learned of the demise of KofiAnnan a man of strong spirit. I was privileged to serve UN under his term as UN Sec. General & saw first hand how he inspired respect & admiration. His promotion of peace & human rights made him an icon. pic.twitter.com/emu6qs6Ead

Kofi Annan understood the value of sport. Despite everything that divides nations, sport is one of the tools that can bring us together. // KofiAnnan entendia o valor do esporte. Apesar de tudo que divide as nações, o esporte é uma das ferramentas que podem nos unir. #KofiAnnan pic.twitter.com/xozpfnJOQO

Knowledge is power. Information is liberating. Education is the premise of progress, in every society, in every family
Rest In Peace?to a Wiseman ?? pic.twitter.com/9ukVDLXxiR

Difficult to believe. Our leader and hero. Sincere condolences to the #Annan family. May His Soul Rest in Eternal Peace #RIP #KofiAnnan pic.twitter.com/gMbDNu3xEe

Rest in Perfect Peace Sir , you will forever be remembered for your selfless leadership & service to humanity ?????? pic.twitter.com/RKZtO5DIrS

Incredibly sad day to wake up to the news that the wonderful Kofi Annan is no longer with us – he was an extraordinary individual who committed his life to guiding the world to a better place.
Rest well Sir,Ghana and Africa is proud of you.?? pic.twitter.com/9R9g7FZGGJ

#TBT: Kofi Annan with other dignitaries at the final game of the 2006 #FIFA World Cup. pic.twitter.com/SOnx7Gw8U5