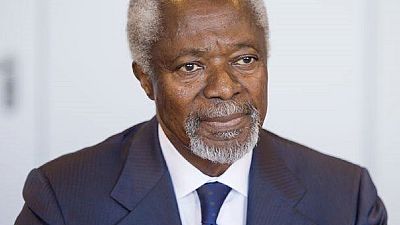 In the wake of the death of former United Nations Secretary-General, Koffi Annan, tributes have been pouring in from world leaders and citizens of the world who are celebrating his enduring legacy as a peacekeeper and advocate for inclusive development.

The Kofi Annan Foundation confirmed that Annan, of Ghanaian nationality, died in hospital in Bern, Switzerland, in the early hours of Saturday.

The current Secretary-General said Kofi’s legacy will ‘remain a true inspiration for us all’, while Ghana’s president, Nana Akufo-Addo declared that flags in the country and diplomatic missions would fly at half-mast for a week starting Monday 20th August.

‘‘He brought considerable renown to our country by this position and through his conduct and comportment in the global arena,’‘ read part of president Akufo-Addo’s statement.

He was an ardent believer in the capacity of the Ghanaian to chart his or her own course onto the path of progress and prosperity.

‘‘He was an ardent believer in the capacity of the Ghanaian to chart his or her own course onto the path of progress and prosperity.’‘

I have directed that, in his honour, Ghana’s national flag will fly at half-mast across the country and in all of Ghana’s diplomatic missions across the world, from Monday, 20th August, 2018, for one week.

Rest in perfect peace, Kofi. You have earned it. God bless. 7/7

Kofi Annan was a guiding force for good. I join the world in mourning his loss. In these turbulent and trying times, his legacy as a global champion for peace will remain a true inspiration for us all. https://t.co/psJ9viPIeu pic.twitter.com/SKfBk5zaY2

Devestated by the news of the death of KofiAnnan. A great man, a dear brother. An immeasurable loss of a great man, a humble statesman and a global icon.

There were even more tributes from the citizens of different countries where Kofi Annan through his world with the United Nations, the Koffi Annan foundation and other initaitives, made a difference.

A life well lived. A life worth celebrating.

RIP Kofi Annan. He will be remembered for his incredible ability to find peace in the most impossible circumstances

Can’t think of a man who inspired an entire generation of Ghanaians like Kofi Annan did. Growing up, many knew they could be Ghanaian and reach for the stars because Kofi Annan proved it was possible. RIP MOBA.

RIP Kofi Annan. You have always been an inspiration to millions in Ghana and beyond.

Very sorry to hear about the passing of former UN Secretary General Kofi Annan. A great multilateralist and advocate for peace and justice around the world. #RIP