Somalia president in Djibouti for talks amid diplomatic tension 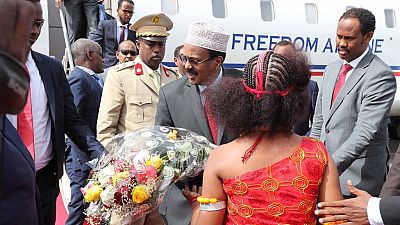 Somali president Mohamed Abdullahi Mohamed Farmaajo is in Djibouti on an official visit. The visit comes amid recent tensions of Somalia’s position on Eritrean sanctions.

The presidency, Villa Somalia, tweeted photos of president Farmaajo’s arrival in Djibouti together with his delegation.

They were met at the airport by the Djiboutian Prime Minister Abdoukader Kamil and some high-ranking members of cabinet.

Villa Somalia said partnership was key to stability, progress and prosperity of the two brotherly nations. Farmaajo is set to hold talks with his counterpart, Ismail Omar Guelleh on a number of bilateral issues.

It is believed that the subject of Mogadishu’s position on United Nation’s sanctions on Eritrea will be discussed. Djibouti recently issued a strongly worded statement over calls by Somalia that it was time U.N. lifted sanctions imposed on Eritrea.

According to Djibouti, it was wrong for Somalia to take a position on the matter given that part of the reasons the sanctions had been imposed was Eritrean aggression on Djibouti.

Djibouti claims Eritrea is occupying its territory and that Asmara continues to hold its citizens as prisoners of war. It has, however, referred the matter to the U.N. chief to assist with negotiations to end the impasse.

Calls for the 2009 Eritrean sanctions to be lifted has been strong in recent months following the peace deal between the country and Ethiopia. Since then, Eritrean president Isaias Afwerki has hosted the Somali president – Eritrea has also mended all relations with Ethiopia and Somalia.