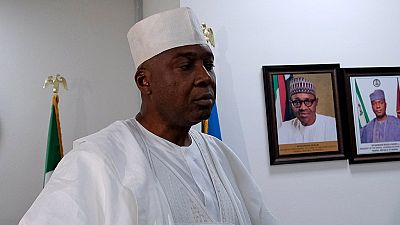 Nigeria’s Senate president Bukola Saraki has announced his resignation from the ruling All Progressives Congress (APC).

Saraki’s decision comes barely a week after a mass resignation of APC Senators led to the main opposition Peoples Democratic Party (PDP) taking the majority in the Senate.

In a terse statement posted on his Twitter handle, Saraki said he was taking his leave from the APC after extensive consultations.

I wish to inform Nigerians that, after extensive consultations, I have decided to take my leave of the All Progressives Congress (APC).

Even though he has yet to disclose his next political moves, political watchers say he is likely to return to the PDP. Saraki has previously served as governor of Kwara State on the ticket of the PDP.

A PDP Senator has since tweeted congratulating Saraki for abandoning the APC and opting to return to the opposition. The move comes months to crucial elections in February 2019.

Incumbent Muhammadu Buhari is seeking a second term in office which decision among other issues has split the ruling party. Already, a splinter group, the Reformed – All progressive Congress (R-APC) is in talks with the PDP over an alliance going into the polls.

It is believed that Saraki is aiming at contesting for the presidency which move has led to his decision. Buhari – a northerner – is sure to come up against a candidate who can secure votes for the PDP in the largely Muslim north of Africa’s most populous nation.