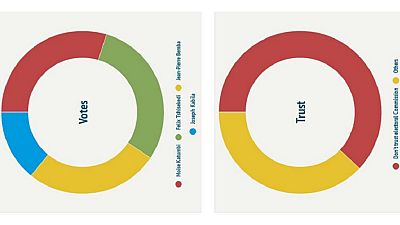 A new opinion poll released on Tuesday shows Congolese president, Joseph Kabila trailing his opponents ahead of the December election that he is constitutionally barred from contesting.

Millionaire businessman Moise Katumbi, a former governor of the country’s copper-producing region who says he will return from a two-year exile on Friday, would receive 19 percent of the vote, as would Felix Tshisekedi, who leads Congo’s largest opposition party, the poll showed.

The poll, conducted by the Congo Research Group at New York University and Congolese polling firm BERCI, also shows that 62 percent of people do not trust the electoral commission to conduct a free and fair election, due to be held on Dec. 23.

Kabila is barred by term limits from standing for a fresh term in the election but has yet to publicly commit to stepping down. Some of his allies are pushing a legal argument they say allows him to run again.

The deadline to declare candidacies is Aug. 8. The United States and France as well as other countries including neighbour Angola have expressed fears that a Kabila candidacy could plunge Democratic Republic of Congo into chaos.

Dozens of people have been killed by security forces in the past two years during protests against repeated election delays and memories remain fresh of catastrophic civil wars around the turn of the century in which millions died.

Former vice president and militia leader Jean-Pierre Bemba would receive 17 percent of the vote in the election, the poll showed. He plans to return to Congo on Wednesday after his war crimes convictions at The Hague were quashed in May.

Katumbi and Bemba, however, could be barred from contesting the election due to criminal convictions for real estate fraud and witness tampering, respectively.

The constitutional court, to which Kabila this month appointed two loyalists, would rule on their eligibility once they have submitted their candidacies.

Kabila would receive 9 percent of votes in the election, the poll showed. He and other possible candidates from his ruling coalition would together receive about 19 percent.

The last nationwide survey conducted by Congo Research Group and BERCI in February showed Katumbi with 24 percent, Tshisekedi with 13 percent, Bemba with 10 percent and Kabila with 6 percent.

More than six in 10 people polled said they do not trust the electoral commission or the courts to oversee the process, and 45 percent said they would not accept the result if Kabila were to win.

The Congo Research Group is directed by Jason Stearns, a former U.N. investigator in the country. The poll was based on 1,154 telephone interviews of Congolese across the country’s 26 provinces.