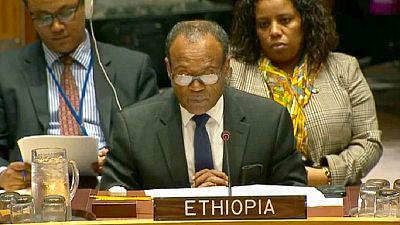 Ethiopia is working to restore relations between two of its neighbours, Djibouti and Eritrea, its envoy to the United Nations told the Security Council on Monday.

According to ambassador Takeda Alemu, Addis Ababa was doing so in the prevailing spirit of embracing and all inclusive progress and development of the wider Horn of Africa region.

He reiterated how dynamics of security and cooperation in the region was fast changing especially after the Ethio – Eritrea peace agreement, and more recently the Eritrea – Somalia normalization of relations.

Ethiopia has expressed its readiness to do whatever is necessary to contribute to the normalization of relations between Eritrea and Djibouti and it is our firm commitment this is critical for peace and security in our region.

Why Ethiopia is entering mediation between Asmara and Djibouti

He stressed that Ethiopia believed there was the need for other countries to benefit from the new lease of the life the region was experiencing hence their move to reconcile Asmara and Djibouti.

“I want to take this opportunity to assure you, Mr. President, that the prevailing spirit is one of embracing and not excluding anyone. It is in this spirit that we are trying to do our part to contribute toward the restoration friendly relations between Djibouti and Eritrea.

“Ethiopia has expressed its readiness to do whatever is necessary to contribute to the normalization of relations between Eritrea and Djibouti and it is our firm commitment this is critical for peace and security in our region.

“The new spirit that has been created should exclude no country and this is the foundation on which Ethiopia’s policy is based. Naturally, this new spirit also demands that no country should no longer be isolated. The Council has an obligation here,” the ambassador added.

He was speaking under the topic: “The politics of the Horn of Africa is in the process of rapid change and with salutary implications,” whiles addressing the Security Council. The Council had on July 30 received the 120 day’s briefing by the Chair of the Somalia-Eritrea Sanctions Committee, including the outcome of his recent visit to the region which took him to Djibouti, Somalia and Ethiopia.

Ambassador Tekeda Alemu’s full address highlighted the positive developments happening in the region, which has enormous implication for the committee and the sanctions regime.

Since the Ethiopia – Eritrea peace deal signed in Asmara, Djibouti stepped up its resolve to normalize relations with Eritrea seeking the assistance of the United Nations (U.N.) in that regard.