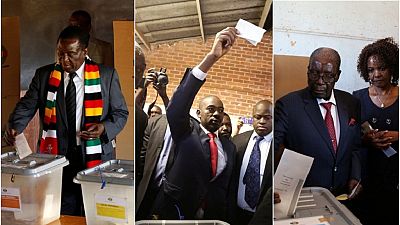 Zimbabwe’s President Emmerson Mnangagwa cast his vote on Monday in the first election since the removal of Robert Mugabe, rejecting claims made by his former mentor a day earlier that the election would not be free.

Mnangagwa, a 75-year-old former intelligence chief, is facing off against Nelson Chamisa, a 40-year-old lawyer who is vying to become Zimbabwe’s youngest head of state.

After casting his ballot in the central city of Kwekwe, Mnangagwa was asked about Mugabe’s claim that the vote wouldn’t be free since it was being run by a “military government”.

I can assure you that this country is enjoying democratic space which has never been experienced before.

“I can assure you that this country is enjoying democratic space which has never been experienced before,” Mnangagwa told public television outside the polling booth.

“In any democratic space and country, people have the freedom to express their views, negative or positive.”

President Mnangagwa’s challenger in the election, Nelson Chamisa, told a cheering crowd: “Victory is certain, the people have spoken,” Chamisa said after casting his ballot in Harare as a cheering crowd chanted: “President! president! The president is here!”

“I have no doubt that by end of day today we should be very clear as to an emphatic voice for change,” Chamisa said.

He will need a large turnout from his supporters in towns and cities, with ZANU-PF dominant in the countryside.

Chamisa, who honed his rhetorical skills in the courtroom and the pulpit, has attracted young and unemployed voters frustrated with nearly four decades of ZANU–PF rule.

Meanwhile, Zimbabwe’s former president, Robert Mugabe, 94, cast his vote in a Harare township on Monday in Zimbabwe’s first election that does not include his name on the ballot paper.

A frail Mugabe, accompanied by his wife, Grace, shuffled into the polling booth and spent several minutes filling in his ballot paper with the help of an assistant. A huge crowd gathered outside, some cheering, many booing.

Mugabe was removed last November in a de facto coup that brought his former ally Emmerson Mnangagwa to power. Mnangagwa is the favourite in Monday’s vote.

International observers from the European Union, the United States and the Commonwealth are watching polling stations across the country.

“However the public’s faith in the secrecy of the ballot is essential for the credibility of the process. We urge the authorities to do everything possible to ensure the secrecy of today’s vote.”

For Zimbabwe to be welcomed back into the international fold, get rid of painful sanctions and secure the donor funding it needs to stem chronic cash shortages, observers have to sign off on the vote as being credible.

Should any of the candidates fail to win an absolute majority in Monday’s poll, a second round of voting will take place on September 8.