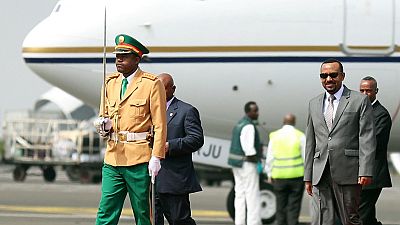 <p>Ethiopian Prime Minister Abiy Ahmed will leave Addis Ababa on Thursday as he heads to the United States for his first visit since taking office in early April.</p> <p>The six-day trip will be spent between Washington DC and Los Angeles, his chief of staff, Fitsum Arega, confirmed on Twitter. </p> <p>According to organizers of the event dubbed: ‘‘Tear down barriers, and build bridges!’‘ the sole purpose of the visit is to engage Ethiopia’s vast diaspora community. </p> <p>They said the open nature of it was to break off traditional meetings that usually involved “community leaders and luminaries tucked as an aside to diplomatic trips.</p> <p>“Such commitment reinforces the concern the PM has already shown with regard to the welfare and dignity of Ethiopians around the globe. Concrete steps and actions taken subsequent to such engagements show the PM’s capacity to back up his words with action,” they added. </p> <p>The organizers are drawn from a broad cross section of the Ethiopian diaspora holding different views – be they political, religious or ethnic. ‘The platform is open to all, with no need to stand on ceremony or awaiting formal invitations,’ they noted in a press release.</p> <h2 style="font-size:16px;">Helping heal the rift in the Orthodox Church rival synods </h2> <p>During his visit, PM Abiy will also preside over the unification talks between the country’s orthodox churches. Synods of the church based in Ethiopia and the U.S. have agreed to heal a rift that hed to a split.</p> <p>The Prime Minister has previously held talks with a peace committee based in Addis Ababa. At the said meeting, Abiy earnestly impressed upon them that the church, as a representation of Ethiopia, should lead by example and become a symbol of the current peace, unity and reconciliation efforts.</p> <p>The accord reached by the two parts of the church will be formalised in a ceremony to be held in Washington and attended by Prime Minister Dr. Abiy Ahmed, as well as six senior clergy representing both sides.</p> <p>To underscore the importance of this accord, the first order of business for the Prime Minister upon arrival in the United States would be to meet His Holiness Abuna Markorios and members of the US synod.</p>