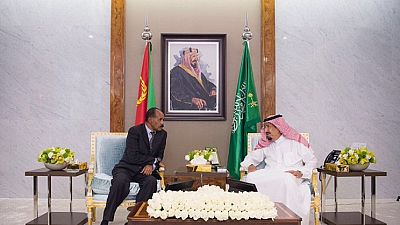 Eritrean president Isaias Afwerki on Monday (July 23) arrived in Jeddah for an official visit having departed the capital Asmara earlier that morning.

Information minister Yemane Meskel wrote on Twitter that the president was in Saudi on the invitation of King Salman. Both sides will hold consultations on bilateral and regional issues of cooperation & coordination.

The president’s last reported visit to the Middle East was earlier this month when he visited the United Arab Emirates (UAE).

During his visit, Afwerki held talks with the Abu Dhabi Crown Prince Sheikh Mohamed Bin Zayed on enhancing existing ties of cooperation between the two countries.

Eritrea’s information minister Yemane Meskel at the time reported that the two leaders agreed to increase investment in different sectors including education, health, physical infrastructure, agriculture and manufacturing among others.