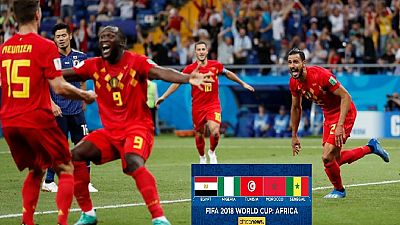 It took a great escape in injury time to get there after being two goals down to Japan, but Belgium can now view their quarter-final against Brazil free of the weight of expectation.

“When you play against Brazil, you need to understand they are the best team in the competition,” coach Roberto Martinez said after a final charge up the park four minutes into stoppage time gave Belgium a 3-2 win and a tough date in Kazan on Friday.

“We can enjoy it from the first minute,” the Spaniard said, describing the fixture as a childhood dream for footballers. “I don’t think anyone expects us to go through to the semi-finals.”

I don’t think anyone expects us to go through to the semi-finals.

In a goalless first half on Monday, where the Japanese gave a side ranked third in the world by FIFA no space and threatened on the break, his players displayed “a fear of not being able to fulfil the tag of being favourites”, said Martinez.

Only once they were 2-0 behind with half an hour to play and “nothing to lose” did the Red Devils “almost enjoy the opportunity of getting back into it”, he added.

So against Brazil, “we can really enjoy it from the first second.”

He refused to take questions on his tactics, praising the Japanese and the “hunger” of his own players, though Belgians at home are asking plenty of questions about the strength of his three-man defensive line and the sharpness of an attacking force which had knocked in nine in three games in the group phase.

Brought in from Everton after quarter-final disappointments at the last World Cup and Euro 2016 to provide some Premier League collective steel to a “golden generation”, Martinez silenced any critics with a double substitution.

Yannick Carrasco and Dries Mertens had danced past lesser opposition in support of Eden Hazard and striker Romelu Lukaku but the Samurai Blue’s pressing left them at sea.

Within 10 minutes, after a lucky goal from Tottenham Hotspur full-back Jan Vertonghen, Fellaini had headed the equaliser.

As extra-time loomed, a quick throw out from goalkeeper Thibaut Courtois, a run through the middle by Kevin De Bruyne to feed Thomas Meunier on the right and a cross that Lukaku deftly left for Chadli had the Belgians in heaven in just 10 seconds.

“Miracle men,” was the simple headline in Brussels’ Le Soir.

Friday’s encounter with Brazil will test whether they can make good on tactical and technical promise but the ‘miracle’ of Rostov suggests Martinez has brought mental steel and strength in depth.

Captain Hazard confessed it felt like Euro 2016 all over again, when a couple of key injuries saw the Belgians surrender 3-1 to modest Wales.

Meunier, too, admitted that he had thought, “It’s all over.”

Against Brazil, he said: “We’ll have more tough moments. But it will be a great game. It’s now or never for Belgium do show we have the talent and what they call the ‘golden generation’.”