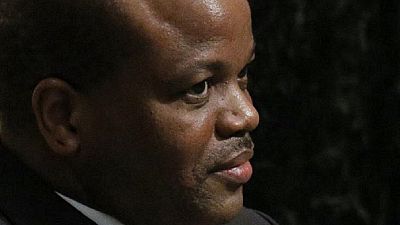 Police fired stun grenades and rubber bullets at protesters in eSwatini on Friday as they marched against poor service delivery, alleged misuse of state pension funds and a proposed law to charge citizens who marry foreigners.

At least one person was taken to hospital with injuries after police fired on the crowd of more than 2,000 placard-waving demonstrators walking towards government headquarters in the capital Mbabane, a Reuters witness said.

How the royal police treated workers of Swaziland today during a peaceful march for freedom. pic.twitter.com/L2eGyzEV6z

We are very worried with the way police behaved. We have recorded their brutality.

The tiny landlocked southern African country, formerly known as Swaziland and with a population of 1.4 million people, is ruled by the increasingly powerful King Mswati III, the continent’s last remaining absolute monarch.

An official at the Trade Union Congress of Swaziland, one of the protest organisers, said the demonstration was a success while criticising the police’s reaction.

“We will reap the fruits of our toil,” Muzi Mhlanga told Reuters. “We are very worried with the way police behaved. We have recorded their brutality.”

Today in Swaziland: Royal police fire at workers who were peacefully protesting. pic.twitter.com/cRQYTNbk4B

The police did not respond to calls for comment.

The king last week said from June 30 parliament would be dissolved and he would make all decisions with a council of ministers, including over a finance bill that would require Swazi citizens to pay 30,000 rand ($2,200) to marry a foreigner.

The king’s cabinet this month ordered an end to a probe into alleged looting of the state pension fund, which contributed $70,000 for his lavish birthday celebration in April.

The king is accused by activists and rights groups of using the public purse to fund his family’s lavish lifestyle while most of his subjects live in poverty, in a country with the world’s highest HIV/AIDS rate.

He denies allegations of corruption.

The king in April renamed the country the Kingdom of eSwatini.