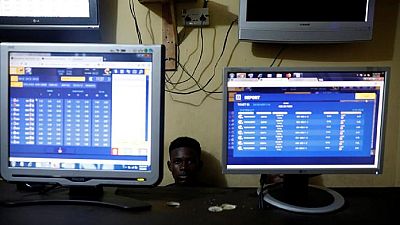 For years, mobile payments failed to take off in Nigeria as they have in countries such as Kenya, where Safaricom’s M-Pesa money transfers have fostered a culture of cashless payments.

We have seen significant growth in the number of payment solutions that are available. All that is definitely changing the gaming space.

“We have seen significant growth in the number of payment solutions that are available. All that is definitely changing the gaming space,” said Seun Anibaba, CEO of Lagos State Lotteries Board, gaming regulator in Nigeria’s commercial capital.

“The operators will go with whoever is faster, whoever can connect to their platform with less issues and glitches,” he said, adding that taxes from sports betting in Lagos State rose 30 percent to 40 percent in 2017 from 2016.

That growth has been matched by a rise in web payments, according to data from the Nigeria Inter-Bank Settlement System (NIBSS), which is owned by the central bank and licensed banks.

With a young population of nearly 190 million, rising mobile phone use and falling data costs, Nigeria has long been seen as a great opportunity for online businesses – once consumers feel comfortable with electronic payments.

Betting firms cashing in on the soccer frenzy whipped up by Nigeria’s participation in the World Cup say they are finding the payment systems created by local startups such as Paystack are proving popular online.

Paystack and another local startup Flutterwave, both founded in 2016, are providing competition for Nigeria’s Interswitch which was set up in 2002 and was the main platform used by businesses operating in Nigeria.

“We added Paystack as one of our payment options without any fanfare, without announcing to our customers, and within a month it shot up to the number one most used payment option on the website,” said Akin Alabi, founder of NairabBET.

He said NairaBET, the country’s second biggest betting firm, now had 2 million regular customers on its website, up from 500,000 in 2013, and Paystack remained the most popular payment option since it was added in late 2017.

In December 2016, it raised $1.3 million from investors including China’s Tencent and Comcast Ventures in the United States.

Paystack, based in the frenetic Ikeja district of Lagos, said the number of monthly transactions it processed rose from about 8,000 in early 2016 to more than 900,000 as of June 2018.

“In early 2016 we were processing about $3,000 a month. Today we process well over $11 million every single month,” said Emmanuel Quartey, Paystack’s head of growth.

He said an ecosystem of developers had emerged around Paystack, creating software to integrate the platform into websites. “We have seen a growth in that community and they have carried us along,” said Quartey.

Paystack said it enables payments for a number of betting firms but also a wide range of businesses, from utility services to transport companies to insurer Axa Mansard.