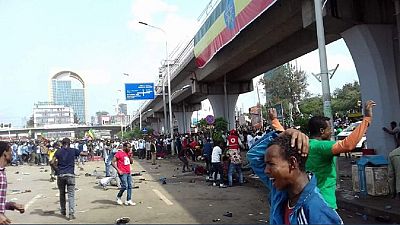 Several people were killed and injured in an explosion at a rally attended by thousands in Addis Ababa on Saturday, Ethiopia’s new Prime Minister Abiy Ahmed said.

The rally was being held in Ethiopia’s capital in support of the 41-year-old ex-soldier who has outlined a series of radical reforms since taking office in April.

“A few Ethiopians were injured. There are a few people who lost their lives,” Abiy said in a televised addressed after the explosion, which occurred minutes after he finished his speech at the capital’s Meskel Square.

Abiy described the incident as “an unsuccessful attempt by forces who do not want to see Ethiopia united.”

“It was a grenade. Someone tried to hurl it to the stage where the prime minister was in,” Seyoum Teshome, a member of the organizing committee, said. “I saw some five people injured following the blast,” Seyoum told Reuters.

BREAKING: Several killed in explosion at #AddisAbaba during a rally in support as Ethiopia’s new reformist prime minister speaks.

Abiy stunned Ethiopians this month by saying he was prepared to fully implement a peace deal with Eritrea signed in 2000 and meant to end a two-year war between the country and its neighbor that devolved into a stalemate resulting in huge military build up by both countries.

It is one of many policy shifts announced since Abiy took office, moves that could reshape Ethiopia’s relations with its neighbors and have equally dramatic impacts inside the country of 100 million people.